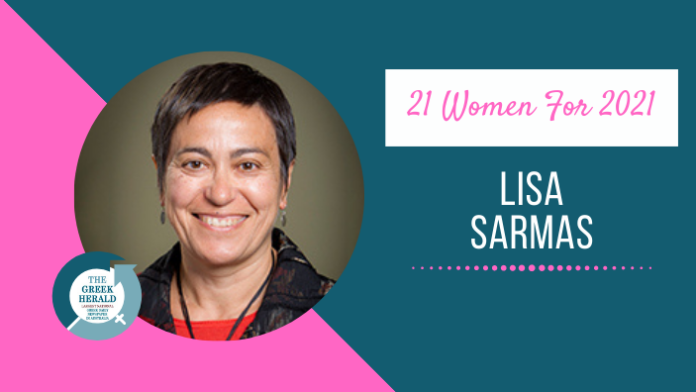 “I think the real barrier for people entering areas like law is less on the basis of sexuality and gender and probably more on social class, although all forms of structural disadvantage of course are interconnected and play a role,” Lisa Koralia Sarmas says as we sit down for our exclusive chat.

“I come from a very proud working class Greek family, but a lot of people working in law come from very privileged backgrounds. That, I think, is what needs to change.”

It’s clear from the very beginning that the Associate Professor of Law at Melbourne Law School feels a great responsibility to call for social justice and inclusivity in Australian society.

Whilst many would say this commitment comes from Lisa’s proud identification with the LGBTIQ+ community, that’s not entirely the case. In fact, Lisa was attracted to the idea of fighting for equality from a very young age, when she used to watch old crime dramas on television and imagined herself as a lawyer.

“Probably like a lot of young kids watching movies with court scenes, I had quite a romantic view of what the law was like. But it was watching those movies and a real commitment to justice that got me interested in law,” Lisa tells The Greek Herald.

From there, Lisa went on to study a Bachelor of Arts at Melbourne University in 1983, before changing to a combined Arts/Law degree two years later and completing her practical legal training. All of this, Lisa stresses, couldn’t have been done without the incredible support of her parents.

“My parents have always been the most supportive people I’ve ever known of everything that I’ve wanted to do and without their support, I probably wouldn’t be able to do any of this. As far as law was concerned, they provided the perfect learning environment for me at home and supported me every step of the way,” Lisa says.

‘Social justice is at the forefront of what I do’:

It’s with this support and love which ultimately saw Lisa ‘stumble into academics’ at Melbourne Law School in 1991.

“A friend of mine, who was working at the same law firm as me, got a job at Monash University as an academic and I thought, ‘that sounds really interesting.’ It allowed that opportunity for deep thought in the law and I found that attractive. So I approached Melbourne Law School… and I was employed there,” Lisa says.

Since then, Lisa has never looked back and she says the school always accepted her as a female academic and LGBTIQ+ member, who has been in a relationship with her partner, Adele, since 1996.

“The Law School itself has been an incredibly inclusive and welcoming place and I found it quite a comfortable place to be an academic there,” Lisa says.

Of course, I had to ask – Can the same be said for the Greek Australian community?

It’s this clear acceptance which has driven Lisa to fight harder for equality and the inclusivity of those people who don’t have the same privileges as her. Although Lisa knows there’s no easy way to achieve this, she says she’s more determined than ever to make substantial change.

“I feel I have a great responsibility… when I write things and when I deal with students to [make sure] that social justice is at the forefront of both those words and those actions that I take. That is the key really – that we’ve got to be aiming for inclusion on the basis of gender, sexuality and class as well,” Lisa explains.

Powerful words from a trailblazing female law academic who is determined to make waves in the field of social justice and equality.