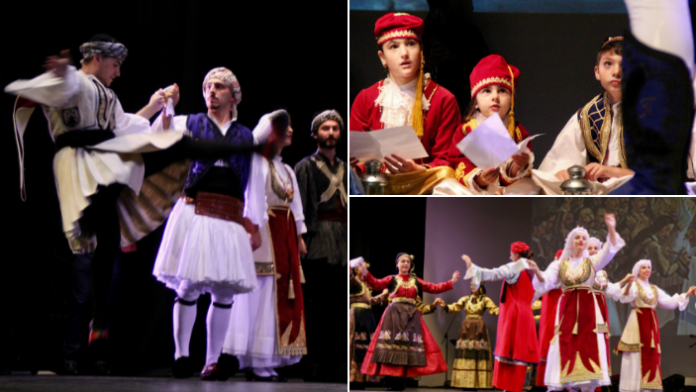 With an over two-hour, sold-out spectacle that included storytelling, live music, theatre and traditional dances, the Greek Orthodox Community of SA (GOCSA) Dance Academy students entertained the nearly 500 spectators who attended the ‘EPANASTASI’ performance held at Adelaide University’s Scott Theatre, on Saturday May 8.

Among the attendees were state, council and community representatives, the Consul General of Greece in Adelaide George Psiachas and Federal Member for Adelaide Steve Georganas.

“It takes a lot of effort for an organisation to put an event like this together,” said GOCSA Dance Academy Coordinator, Hellas Lucas and went on to thank the Greek Orthodox Community of SA (GOCSA) for the funding, the parents for encouraging their children to attend Greek dance classes and teachers, Yianni Oikonomou, Anastasia Mavrides and George Douventzidis, for their passion and dedication.

GOCSA President, Bill Gonis, said that this year is a milestone for the community as it marks the Greek Revolution bicentennial and the 90th Anniversary of the founding of the Greek Orthodox Community of SA.

“This evening, as Australian Greeks, we proudly display our heritage through Greek dance and music and we take pride in the achievements of those who were part of the uprising and those who paid the ultimate price in the fight for the freedom of the Greek nation,” Gonis said, expressing his gratitude to the parents who support the continuation of the Greek cultural heritage.

The Community’s Secretary General, Panagiotis Ppyros, said that GOCSA was the first Greek Community in SA -established in 1930- highlighting that the Dance Academy is fully supported by GOCSA and the lessons are free of charge for all young Greeks.

“Tonight, we honour the heroes of the Greek revolution and the pioneers who founded this organisation that we endeavour to keep independent as it has been since the day it was established,” Ppyros said.

Master of Ceremonies Theo Panagopoulos and Narrator James Avdoulas kicked off the performance, before the nearly 90 students, aged from 5 to 50 years old, took to the stage and performed dances from around Greece to the tunes of Melbourne based folk band Omados, Efthimi Avgetidis (Pontian Lyra) and vocalists Melpomene Tantalos, Sofia Dimitrakopoulou and Stamatis Dimitrakopoulos.

The event concluded with the usual group shot and the promise that ‘EPANASTASI’ will be continued on and off stage.