‘We are evolving’: The Hellenic Club of Canberra’s President, Andrew Satsias, on future plans 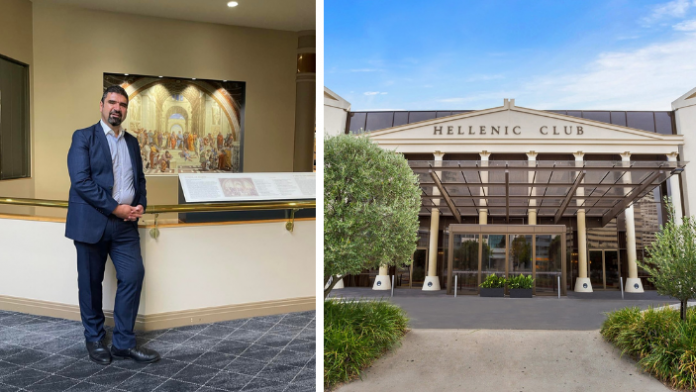 Since its official opening on February 24, 1979, the Hellenic Club of Canberra in Woden has become famous for its fine dining, live entertainment and community spirit.

This success, at a time when other ethnic clubs in Canberra are permanently closing their doors, is a testament to the work of the local Greek community, the Club’s staff and members, as well as the Board of Directors who steer the ship from behind the scenes.

Andrew Satsias, who has been on this Board since 1997 in various roles including three terms as President, has been one of the people instrumental in the Club’s future development and evolution.

In saying this, The Greek Herald sat down exclusively with Mr Satsias to find out more about these future plans and about the continued role of the Club in Canberra society.

Mr Satsias was born in Cyprus but migrated to Australia with his family at the age of six. He spoke no English and tried hard to integrate into Australian society.

“I tried too hard to be the kid that doesn’t stand out. Being a young kid, you want to blend in and Anglicise everything you do,” Mr Satsias says.

It wasn’t until Mr Satsias finished studying law at university and travelled to Cyprus that his sense of pride in his Hellenism resurfaced and set him on a path to becoming a member at the Club.

“I saw my family and relatives [in Cyprus] and I started to build a pride in my Hellenism and my background,” he explains.

“So that’s probably what prompted me to make enquiries and turn up to a general meeting at the Club, where I was approached by Michael George [then President].

“Michael brought me onto the Board at a young age and was instrumental in bringing the next generation to the Board of the Club, helping to safeguard our future.

Mr Satsias is now the longest-serving President and Director of the Club, but he remains as humble as ever and always takes the time to acknowledge not only the people who’ve supported him on his journey, but also the Club’s dedicated staff.

This includes his wife and three children; the late Mr George; his father-in-law Michael Kouparitsas, who is Mr Satsias’ ‘greatest influence in both business and leadership’; and three of the Club’s longest serving staff members – CEO Ian Cameron, Lisa Andonaros and George Kazias.

“The tireless effort and contribution of our founding members and past and present board members has resulted in the successful Club that we have today,” Mr Satsias adds.

“We’re a big business. We’ve got a CEO, we’ve got staff, we’ve got senior managers, we’ve got probably 200 staff that look after the club.

“We [the Board] really are the captains of the ship. We steer the ship. We don’t manage the docks and I think that allows us to do the job well.”

From integration to embracing Hellenism:

‘Doing the job well’ is exactly what’s been happening at the Club in recent years, especially as it embarks on a changing of the guard and mindset.

Mr Satsias says the Club is now ‘more than just a physical venue’ and is moving ‘with the times.’

“Initially, the objective of the Club was to facilitate and allow the Greek community to integrate into Australian society and we did that very successfully. Canberra Greeks have grown to be one of the most influential ethnic groups in Canberra,” Mr Satsias explains.

“Our objective as a Club now is probably the reverse of that – to maintain our culture, remind our next generation of their heritage, make sure that we’re not just creating a large multimillion dollar community or brand.

“The Club has got to be true to the original ideals of the community but importantly, it’s changed and evolved.”

‘We want it to be a new precinct’:

This successful evolution, Mr Satsias says, is tied to a number of things including the Club’s promotion of both Hellenism and multiculturalism; the closer working relationship between the Greek Orthodox Community and Church of Canberra (GOCCC) and its President, John Loukadellis; as well as the Club’s new income diversification strategy.

“We’re in the midst of strategic planning… It’s a reality that has to take place quickly because poker machines, which have been our primary source of income for some time, are declining in support from the politicians here,” the President says.

“So we’ve been doing this for probably over 20 years now – moving to diversify our income base away from our reliance on poker machines.

“Part of that income diversification also includes our own site – changing it to meet the times. The Club’s site is getting older and it’s quite expensive to run. We’re not proposing to knock it down but rather develop further on our land.

“As part of that, there’s a number of things we’re looking at as to how we can generate that alternative income for the Club and that includes greater entertainment, potential office and commercial space.

“We want it to be a new precinct.”

With the current Board leading the Club and with the support of Club Staff and the local Greek Community, there’s no doubt this new precinct will be up and running in no time.