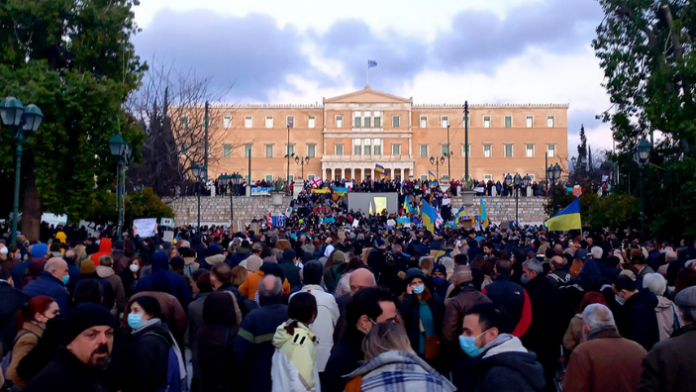 Thousands of people gathered in Greece’s capital on Tuesday afternoon to protest against the ongoing Russian invasion of Ukraine and express their solidarity with the Ukrainian people.

People at the rally, which took place at Syntagma Square in Athens, were waving Ukrainian flags and holding banners such as ‘No To War’ and ‘Stop Putin’ as they called for an end to hostilities.

The Mayor of Athens, Kostas Bakoyannis, was also in attendance.

A video was also shown during the event with a message from Ukrainian MP Kira Rudik who thanked every protestor, described Ukraine as “the shield of Europe” and added that “what hurts her the most is that there will now be a new generation of Ukrainians who will know what war is.”

This protest comes as Russia warned Kyiv residents to flee their homes on Tuesday and rained rockets on the city of Kharkiv as Russian commanders intensified their bombardment of Ukrainian urban areas.

“Greece was always on the right side of history and we are doing the same today. For Greece there are no dilemmas, we are on the side of Ukraine, freedom and democracy,” Mitsotakis said in his speech.

So far, about 1,500 Ukrainian citizens have entered Greece with biometric passports. All these people have relatives, friends and acquaintances in Greece.

Greece’s Minister of Civil Protection, Takis Theodorikakos, confirmed that the government and the Greek police will make it easier for Ukrainian refugees without biometric passports to enter Greece.

“This is a sign of humanity and full support for the Ukrainian people and the specific people who are being tested by the war in their country,” Theodorikakos said.

READ MORE: Over 1,000 Ukrainian refugees have arrived in Greece since Russian invasion.

On Tuesday, Greece’s Deputy Foreign Minister, Andreas Katsaniotis, also welcomed 50 Greek and Cypriot citizens who were rescued from Ukraine by the Foreign Ministry.

“Our Consular authorities in Mariupol and Odessa, which are located in the hearths of Hellenism in Ukraine, remain on the side of our expatriates and will provide all necessary support,” Katsaniotis said at the meeting.

Cyprus to provide humanitarian not military aid to Ukraine:

Petridis, who participated in the EU Council of Foreign Ministers via teleconference, unequivocally condemned the Russian invasion of Ukraine, expressing his strong concern about the humanitarian crisis.

In response to EU Ministers question about whether Cyprus would provide military equipment to Ukraine, Petridis said that Cyprus will send humanitarian aid instead.