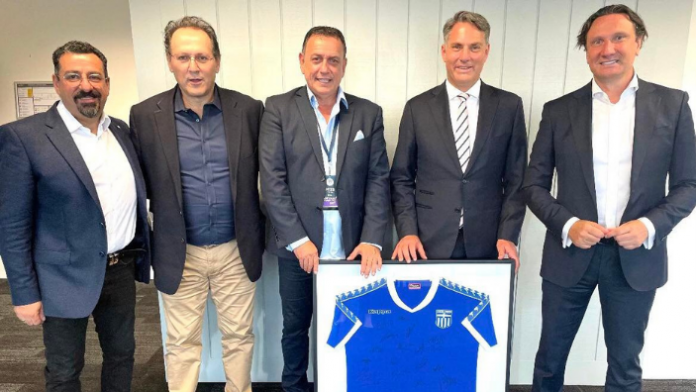 South Melbourne FC scored an emphatic win on Thursday against Heidelberg United FC before a large crowd. There to watch the game and witness this classic derby was Deputy Opposition Leader, Richard Marles.

Richard Marles was presented at the game with the Original Heritage Jumper signed by current players to thank him for his attendance.

“The atmosphere was electric. I have certainly become a fan of South Melbourne FC, a team that truly reflects the multicultural fabric of our country,” Mr Marles said after the match.

“I aim to be at as many games as possible as football is a sport that I follow and enjoy, and Lakeside Stadium truly is a great place to watch this game and particularly South Melbourne FC. Their supporters get right behind their team.”

The President of South Melbourne FC, Nick Maikousis, expressed his appreciation to Mr Marles for attending.

“It was great for Richard to be at the historic derby which was the season opener. A great time to have Richard with us,” Mr Maikousis said.

Club Chairman, Bill Papastergiadis, also acknowledged the effort made by Mr Marles to be at the game.

“Richard was in Parliament in Canberra until late that afternoon and took the earliest possible flight to Melbourne to be with us. Richard went out of his way to be at the game and his efforts reflect his commitment to our community and to football,” Mr Papastergiadis said.

“He is generous with his time and shows a genuine interest in making a difference. We hope to work with Richard as part of South’s journey to the new National Second Division. They are exciting times and its great that we have key parliamentarian leaders with us during this journey.”

Head of Senior Football, Andrew Mesourouni, noted that the quality of football on the pitch was a great example of the high level of football shown by both teams.

“It was a riveting game and everyone who attended would have been impressed with the quality of the football that was played,” Mr Mesourouni said.