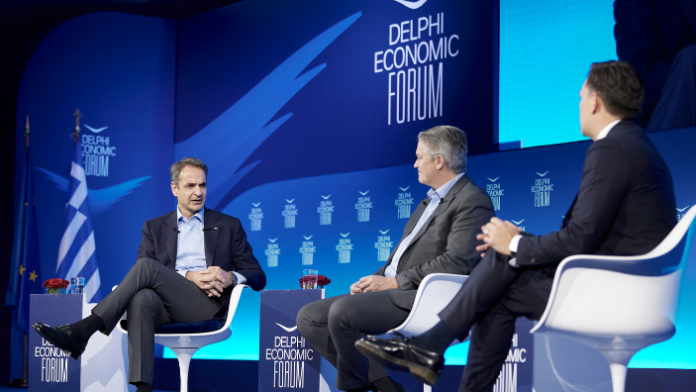 The Delphi Economic Forum is an annual event which gathers leading figures from a variety of sectors, including politics, business, technology and education.

This year’s iteration was held from April 6 to April 9 and featured over 750 speakers who spoke on a number of topics such as the East Med Pipeline, the current energy crisis due to the Russia-Ukraine war, and the Prespes Agreement.

Greek Prime Minister, Kyriakos Mitsotakis, has called for a joint EU response to the energy crisis, saying the bloc should decouple European electricity and gas prices.

Mitsotakis was speaking during a discussion with Organization for Economic Cooperation and Development Secretary-General, Mathias Cormann, at the 7th Delphi Economic Forum on Saturday.

“We need to break the link between gas prices and electricity prices. If we do not do that, we will impose huge economic pain on our citizens and our businesses. I hope we can do this on the European level,” Mitsotakis said.

“If we do not do this, we will allow the forces of populism to re-emerge stronger…”

Mitsotakis also pointed to Greece’s early repayment of IMF loans, the approval of the first instalment from the Recovery and Resilience Fund, and the expectation the country will exit the enhanced surveillance regime in August.

Speaking at the Forum on Saturday, Greek Foreign Minister, Nikos Dendias, rejected the idea that the EastMed pipeline is dead in response to a statement by US Undersecretary of State, Victoria Nuland, during her visit to Athens last week.

“The EastMed is alive and kicking,” Dendias said, adding that the main concerns of the United States with the endeavour are its financial viability and the projected length of the project.

According to Ekathimerini, Dendias also discussed the recent statement by the US State Department that the sale of F-16 fighter jets to Turkey would serve American interests.

He explained that the US government is pressured by the Russian invasion of Ukraine, but that does not mean Greece will cease its cautious approach to its neighbour.

Petrovska: Prespes will be respected

In an interview with Ekathimerini during her visit to the Forum, North Macedonia’s Defence Minister, Slavjanka Petrovska, said the Prespes agreement with Greece will be respected by a possible new government in Skopje.

“This agreement was marked as one of the most significant achievements in the Balkans in the past decades, and I am convinced that, politics aside, all political parties, when in position to represent the government and the country, will oblige to what has been agreed and signed,” she said.

Petrovska was referring to the agreement in 2018 that ended a decades-long name dispute with Greece and paved the way for North Macedonia’s course to NATO.

Referring to North Macedonia’s accession to NATO, Petrovska also insisted it would serve as a shield against the diffusion of the Ukraine crisis in the Western Balkans.