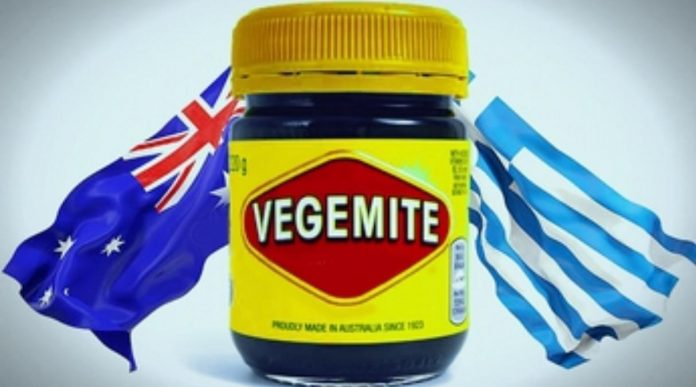 Growing up in Australia, it was rare for me to eat Vegemite. My first encounter with it was at a half sandwich swap in Primary School. It was in Grade 2, sitting with my then three best friends, Sharon, Melissa and Guiseppina. We were on our lunch break, sitting on one of those wooden, park-type bench seats in the large, asphalted school yard, overlooking the tall gum trees and the faded white, weatherboard shelter shed.

Sharon pointed to my sandwich and, in a squeamish way, asked, or rather, bellowed out, ‘what’s that?’. It was tomatoes and egg (ntomates me auya – or kayiana). I was tempted to lie and answer ‘tomato and cheese’, as I just wanted to fit in with my peers which included their usual sandwich fillings.

My sandwich looked nothing like tomato and cheese though, unless I meant (and then would have to justify it as) a squashed, mashed or melted version. Instead, I took a deep breath, and both diplomatically and bravely, offered Sharon my lunch, saying: ‘Why don’t you try it, it’s a traditional Greek food’, while Melissa stared and Guiseppina smiled. It was then that Sharon and I did our swap, and I tried Vegemite for the first time.

On that first occasion, I found Vegemite to be weird; salty, different, but exciting. It was a new taste, an ‘Aussie’ one, signifying a further sense of acculturation into the Australian society I grew up in and so wanted to feel a sense of belonging to.

Many years after, an Australian boyfriend made me toasted, sliced bread with a lot of butter on it, yet a thin spread of Vegemite. That was the more acceptable, and apparently, most touted and popular way to enjoy Vegemite. It did taste much better that second time.

Since moving to Greece in 2000, and meeting many Australians of my 2nd generation here, we sometimes find ourselves having a good, old Vegemite ‘yarn’. Such conversation serves as a unifier to all things Australian that we tend to miss and perhaps glorify.

We query where to find it here in Greece, we whisper conspiratorially of where it’s cheaper, and in a bigger size. And shock horror if supplies run out! We become more desperate; willing to traverse kilometers to find a supplier. Feeling lucky, we sigh in relief, applauding the few stores that sell it here!

The more frugal, Vegemite seekers among us Greek Australians in Greece have it sent to us here from Australia. We get friends and relatives, or anyone we can in some instances, to mail us a jar or two, or five!

This desire for our browny-black spread, may often lead to imposing upon these complying senders, or even downright begging them, and perhaps even resorting to blackmail and/or threats! What joy when that special package finally arrives, with the perhaps added bonus of some … Twisties or Tim Tams in the package, complements of the wise and empathic sender.

I’ve heard of a few frowns and ensuing protestations though, upon opening the much awaited and coveted package containing this Australian icon: ‘Hmm, it’s in a plastic tube’. In these cases perhaps toothpaste comes to mind, referring to Vegemite’s more ‘travel-friendly’ packaging, by some of us fussier, Vegemite connoisseurs.

Some Aussie friends here insist that it tastes better in its original glass jars, hinting that old habits, but also nostalgia, die hard. ‘Plastic tubed Vegemite is simply not what we’re used to, it’s not what we had back in the day, in Oz’, a Greek-Australian friend opines. While, others of us, just excitedly yank that Vegemite tube out of that much awaited, magical, bubble-wrap insert package, and ‘get down’ and squeeze, desperate for a Vegemite hit asap!

Vegemite’s popularity here is obvious, due to the fact that our demand leads to supply, and whether you like the product or not, you know it. You have an opinion about it, it’s a ‘Down-under’ icon of delight, or disgust – for the more fussy or some would argue, honest Greek Australians in Greece.

I don’t think our parents generation either in Greece or even in Australia, express a hankering, or even an opinion, about Vegemite. As one Greek Australian friend in Athens, and obviously a voracious Vegemiter, claimed: ‘Vegemite to us, is what tzatziki is for our Oldies!’

Whether we Greek-Australians in Greece like or don’t like our Vegemite, one thing’s for sure – for us, Vegemite unites.