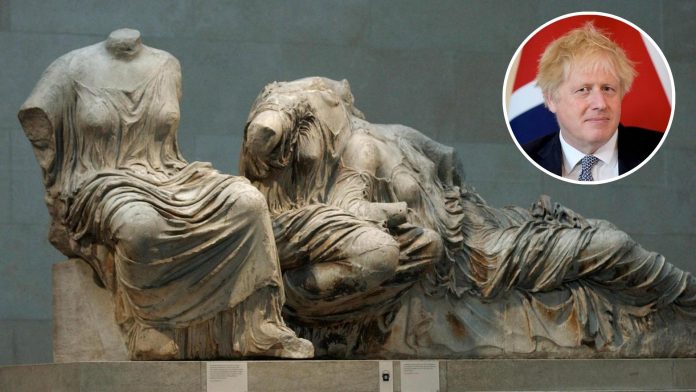 UK Prime Minister, Boris Johnson, argued for the return of the Parthenon Marbles in a letter to then-Greek Culture Minister, Melina Mercouri, in 1986, Ta Nea newspaper has revealed.

As President of the Oxford Union at the time, Johnson implored Mercouri to put the case for the return of the Marbles before the society.

“If the motion was successful, and I am sure that it would be, it would be a clear message to the British government that their policy is unacceptable to cultured people,” Johnson wrote in a letter to Mercouri dated 10 March 1986 and seen by The Guardian.

“I think the majority of students agree with me when I say there is absolutely no reason why the… marbles… should not be returned immediately from the British Museum to their rightful home in Athens.”

Mercouri ultimately accepted Johnson’s invitation to speak at the Oxford Union, reportedly eliciting roars of approval as she exhorted the audience to understand the importance of the sculptures to Greeks.

Johnson’s letter was discovered by Yannis Andritsopoulos, the London correspondent of the Greek daily Ta Nea.

It comes just six months after Ta Nea found another forgotten article written by Johnson, in which he urged the British government to return the Marbles to Greece as they had been unlawfully removed from the Parthenon.

But despite this enthusiasm for the Marbles’ return as a student, Johnson has refused to countenance such a move during his time as Prime Minister, sticking to the same position as the British government he criticised so heavily in 1986.

Last November, Johnson rebuffed a direct request by Greek Prime Minister, Kyriakos Mitsotakis, for the Marbles to be repatriated.