Boris Johnson rules out return of Parthenon marbles to Greece 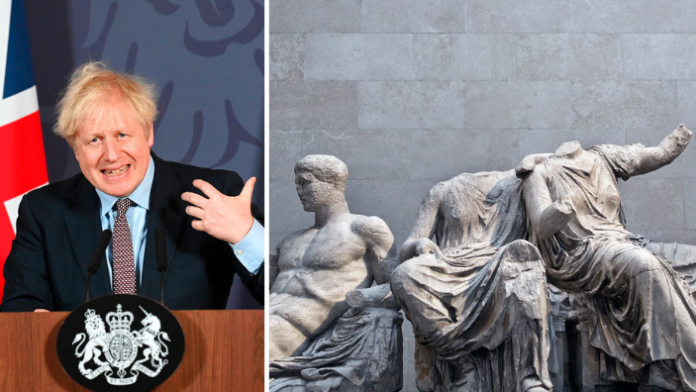 Boris Johnson has used his first interview with a European newspaper since becoming the UK’s prime minister to issue a point-blank rejection of the Parthenon marbles being returned to Greece.

Johnson insisted the sculptures, removed from the monument by Lord Elgin in circumstances that have since spurred one of the world’s most famous cultural rows, would remain in Britain because they had been legally acquired.

“I understand the strong feelings of the Greek people – and indeed prime minister [Kyriakos] Mitsotakis – on the issue,” he told the Greek newspaper Ta Nea when asked to comment on his counterpart’s offer – made in an interview with the Observer in 2019 – to lend priceless artefacts to London in return for putting the marbles on display in Athens this year.

“But the UK government has a firm longstanding position on the sculptures, which is that they were legally acquired by Lord Elgin under the appropriate laws of the time and have been legally owned by the British Museum’s trustees since their acquisition.”

The prime minister, who posed for Ta Nea in his Downing Street office next to a plaster cast bust of his “personal hero”, Pericles, spoke within weeks of Greece marking the bicentennial of its war of independence.

In the run-up to the celebrations, Athens has reinvigorated its campaign to repatriate the fifth-century BC carvings, regarded as a high point of classical art.

Greece has long argued that reunification of the sculptures, displayed in museums across Europe but mostly in London, is integral to understanding the artworks in the context of the temple they once embellished.

In 1816 the British Museum acquired the sculptures from the then bankrupt Elgin, who, as Britain’s ambassador to the Sublime Porte, had ordered them to be torn down from the Parthenon after purportedly receiving a permit from the Ottoman forces occupying Athens at the time.