‘A classy act’: Philhellene, Stephen Fry, on returning the Parthenon Marbles to Greece 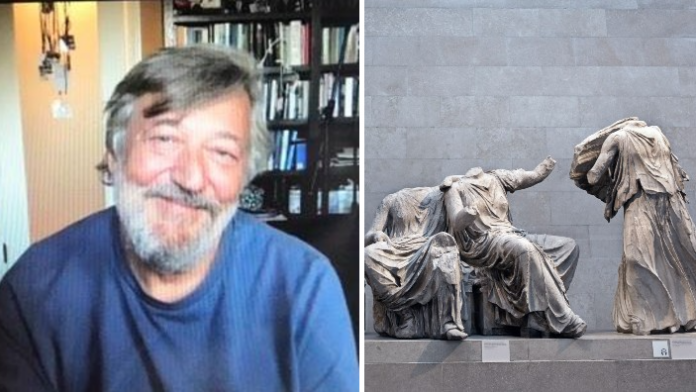 Acclaimed actor, comedian and Philhellene, Stephen Fry, addressed Greek Australians during a special ‘In Conversation’ webinar on Friday, August 6 hosted by The Hellenic Initiative of Australia.

During the webinar, Fry was interviewed by fellow Philhellene and former ABC Managing Director, David Hill, and spoke openly about his love of Greek history and mythology, as well as his strong views on the return of the Parthenon Marbles to Greece.

READ MORE: It’s time to sue: David Hill, Chairman of ‘Australians for the Return of the Parthenon Sculptures’.

‘Beyond anything I imagined’:

The conversation kicked off with Fry describing how his love for Greece ‘goes a long way back’ to when he was a child and wasn’t very good at anything at school.

“But then I realised there was one thing I loved but nobody else seemed interested in and that was language itself and storytelling,” Fry explained.

“And then I discovered Greek myths, I was about 7 or 8, so I would tell these stories because I thought they were the best stories imaginable and better than I could ever make up… and people loved me for it.”

From there, the actor then described how he began to learn the Greek language at boarding school, immersed himself in the work of other Philhellenes such as Oscar Wilde and eventually ended up taking his first trip to Greece when he was at university.

“It was worth waiting for because it was everything I’d hoped. For the first time, to see Athens and Delphi and Olympia… this was beyond anything I could have possibly imagined and it still gives me a thrill,” Fry said.

‘We can never repay Greece’:

It’s this love for Greece which has seen Fry become one of the most prominent critics of the British Museum and their failure to return the Parthenon Marbles to Greece.

When asked by Mr Hill about his thoughts on the topic, Fry said the fact they were stolen from the Parthenon was a “monstrous crime” because the archaeological site “is a fundamental element of Greece.”

He later added that they have not yet been returned to their rightful place because there are people in museums who are almost “genetically programmed to hate the idea of de-acquisition.”

READ MORE: Stephen Fry calls for the UK to return the Parthenon Marbles to Greece.

“They believe that it’s a slippery slope. You give away one thing to one country and you’ll have to give away your entire collection and then it’ll have to be dispersed around the world,” Fry said.

In response, Mr Hill prompted Fry to answer the question: Is there another solution?

“There is a way of returning it which would solve so many problems. That is, we live in a world where it is technically possible to create a fantastic, let’s call it ‘Parthenon Experience’ in the British Museum,” the actor said.

“Because they’re marbles, a cast can be made of them so the British Museum can keep an almost identical cast of everything they’ve had for the last 200 years and then pack up and send the originals by lorry and train and boat… and we’d watch them be placed in the magnificent new Acropolis Museum in Athens.

“So with that ‘Parthenon Experience’ in the British Museum, you would get everything you get now plus you would see this magical moment in which the marbles were restored to their rightful place. It would be such a classy act and Britain frankly needs the world to see it do something classy.”

Having said this, Fry concluded his lecture and stressed the value of the Greek culture and history and how people “can never repay Greece” for what the country has given society.

Share
Facebook
Email
Twitter
Pinterest
Linkedin
WhatsApp
Viber
Print
Previous articleMelbourne’s Greek community come together to help those fighting the fires in Greece
Next article‘I owe it to my father and grandfather’: Tassos Lambrou on his passion for the bouzouki