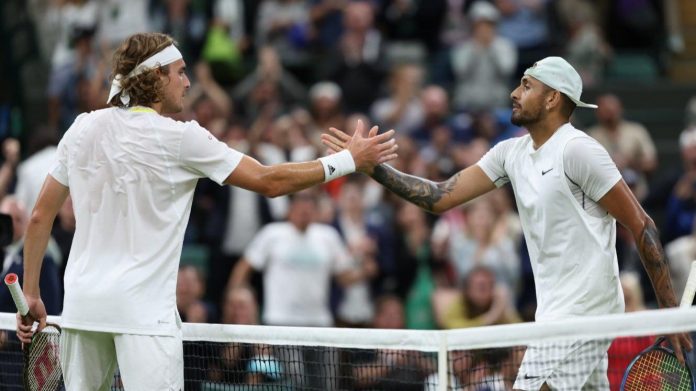 Stefanos Tsitsipas and Nick Kyrgios have both been fined after their fiery third round match at Wimbledon this weekend.

According to Nine Wide World of Sports, Tsitsipas was fined $14,680 for hitting a ball that narrowly missed spectators.

Kyrgios, who had already received the same punishment after spitting in his first round match, was docked $5,872 for his obscene language during the match.

After the fines were handed down, Kyrgios said nothing but tweeted a laughing emoji.

“It’s constant bullying, that’s what he does. He bullies the opponents. He was probably a bully at school himself,” Tsitsipas said.

“I don’t like bullies. I don’t like people that put other people down. He has some good traits in his character, as well. But he also has a very evil side to him.”

In response, Kyrgios said Tsitsipas was just soft and had “serious issues.”

Kyrgios will next play Brandon Nakashima tonight on Centre Court, with a win set to propel him into the quarter-finals and a possible all-Australian clash against Alex De Minaur.