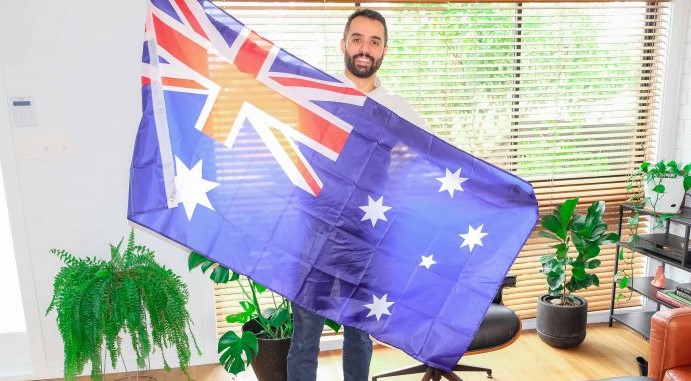 For George Gounaris, this process was significantly different, conducting his special citizenship ceremony online in the comfort of his home on Wednesday.

The Greek Herald spoke with George to discuss the special ceremony, his journey to Australia and the difficult visa process encountered along the way.

The less than ‘flamboyant’ celebration desired

Taking the citizenship test almost 7 months ago, Gounaris was ecstatic to finally become an official Australian citizen. Yet, unknown to him at the time of taking the test, the prestigious citizenship ceremony was to be conducted through the camera on his computer.

“It was quicker than I expected,” Gounaris said, speaking about the online ceremony.

“Very efficient, obviously it wasn’t as flamboyant as it would’ve been in person, but overall good.”

The online ceremony process was announced by the federal government in April, claiming that it will see “up to 750 people per day having their citizenship conferred”. As of April, there were 85,000 people awaiting a ceremony.

With COVID-19 restrictions in place, George’s grand celebration was conducted a bit closer to home than usual.

“Because of the lockdown, we were planning on going out but everything seems to still be very limited in terms of options,” Gounaris said.

“So we just celebrated in the house.”

Moving from Athens in 2012, he came to Australia for its relaxed lifestyle and family connection but stayed to make a new family of his own.

“I guess I liked the lifestyle in a way, and the fact I had some family here helped a bit as well in the beginning,” Gounaris revealed.

“I then started working here on a sponsored Visa, eventually meeting my partner.”

George’s partner, Erin, posted a photo to Reddit following his citizenship ceremony, reaching 10.9k upvotes on the discussion website. Receiving hundreds of comments, George was shocked to hear about the positive response.

The difficult journey of a Greek migrant

Like many other Greeks who first journeyed to Australia, the first few years require hard work and persistence.

“Initially I was employed in hospitality, where I got the Visa from, but obviously after a while…. it becomes too much to work late at night,” Gounaris said.

“I had a degree in social sciences and used the qualifications to start a day job, eventually working for Pronia.”

George began working for the non-for-profit Greek organisation, Pronia, three years ago. Running for over 46 years, they deliver services such as early childhood education and aged care to the Greek community.

Now working to help a community close to his heart, George is extremely thankful for his partner Erin for helping him on his difficult journey, recognising that many aren’t so lucky.

“I was lucky because I met Erin, my partner, and she was able to assist with most of the Visa process that we went through,” George exclaimed thankfully.

“And if it wasn’t for her, it could’ve been really difficult to get the visa, so my partner put a lot of effort. More effort than an immigration agent would have put in.”

George hopes that the public recognises how unreliable and expensive the immigration process ultimately becomes.

“Generally the whole immigration process is very intense and slow. There are multiple steps you need to go through, and it is obviously expensive. It could be very expensive for some people. But eventually, after 8 years, I got there.

“People might want to come from overseas or people may not understand how difficult it is to actually achieve the outcome that I was lucky enough to achieve.”