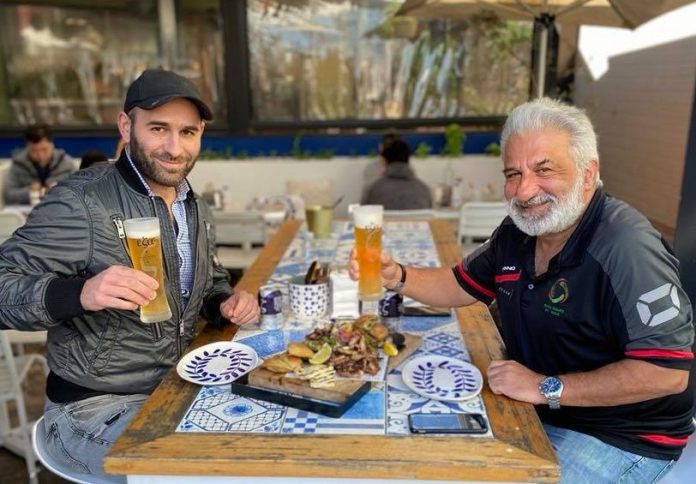 Heartbeat of Football (HOF) received a $10,000 donation on Monday from the director of The Hellenic Greek eatery, Theo Travlos, to amp up their heart health testing.

Founder of HOF, Andy Paschalidis, tells The Greek Herald the donation was a “stunning gesture” and one that will ensure the not-for-profit organisation can continue working with the Victor Chang Cardiac Research Institute and Response for Life to promote healthy hearts in sport.

“When grassroots football starts again in July, I’ll be visiting 16 clubs and conducting on-the-spot tests of things such as a players blood pressure and sugar, to determine their risk of a heart attack,” Paschalidis says during our conversation.

“But what the Travlos family have done is given us the opportunity to engage with another 10 clubs. Which is massive. I’m ecstatic because there might be someone amongst those clubs – a volunteer, a player, a match official, a coach – who might have a health issue they don’t know about and our testing can trigger them to go and get checked out by their GP.”

Paschalidis founded HOF in 2016 as he wanted to promote good heart health in sport via player education, the minimisation of health risks and the installation of defibrillators on all sporting fields around the country.

Four years later and the organisation has only continued to grow. Socceroos legend, Tim Cahill, has jumped on board in the role of Global Ambassador and uses his profile to raise awareness of heart health issues in football and the wider community. At the same time, Paschalidis says he has also received huge support from the Greek Australian community.

“My passion for heart health started back in 2014 when I saw a rise in heart attack deaths in football. But survival is difficult for the organisation. We have no government funding per se and we survive on the goodwill of the public,” Paschalidis says.

“Particularly the Greek Australian community, who have been wonderful supporters and they’ve kept us alive in so many ways. Even in times of adversity, Greeks give. It’s a part of our DNA that’s truly unique.”

And it’s this generosity from the community, as well as other philanthropists, which has enabled Paschalidis to continue to grow his passion and get out the important message of ‘a healthy heart’ before it’s too late.

“If we do not prepare it will be too late to react. So at least if we make everyone aware of their health before they start playing again, it will help. We need the dialogue out there,” he stresses.

Share
Facebook
Email
Twitter
Pinterest
Linkedin
WhatsApp
Viber
Print
Previous articleOpinion: Can we ever be united for the common good of the Hellenic community?
Next articleTGH Exclusive: George Gounaris’ journey of becoming an Australian citizen ends with online ceremony