Tassos Isaac and Solomos Solomou: The ‘hero martyrs’ who protested against Turkey’s occupation in Cyprus 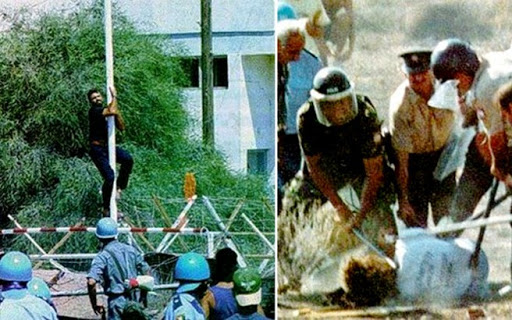 The families of Cypriot’s Tassos Isaac and Solomos Solomou received justice on 24 June, 2008, following the European Court of Human Rights finding Turkey guilty of the murders committed by Turkish protestors.

On August 11, 1996, Tassos Isaac was joined by 200 other motorcyclists from 12 European countries to protest against Turkey’s occupation of Northern Cyprus.

The 24-year-old, along with the other protestors, entered the dead zone of the UN, labelled the “Green Line” , as the Cypriot Police failed to stop them. Met on the other side were over 1,000 Turkish Cypriots, including many followers of the “Grey Wolves”, a far-right Turkish political group.

At 4 pm, a group of Turkish Cypriots entered the dead zone and proceeded to beat the Greek Cypriot protesters with bats and iron rods. Tassos Isaac, in an attempt to help a persecuted friend, was trapped and beaten to death by citizens and police.

Tasos Isaac breathed his last breath 95 meters from the Greek Cypriot side, according to the OHE report. A total of 54 Greek Cypriots, 17 Turkish Cypriots and 12 members of the peacekeeping force were injured in the general clash in the dead zone.

Following the funeral of Tassos, his 26-year-old cousin Solomos Solomos attempted to remove a Turkish flag from a Green Line outpost in outrage.

In the process, he was surrounded by Turkish authorities and Grey Wolf protestors. As he climbed the flag pole, three shots were fired by occupiers and the young man fell dead.

On 24 June 2008, the European Court of Human Rights ruled in favour of Solomou’s family in the case of Solomou and others v. Turkey. His family was awarded monetary compensation.

Solomou is considered a national hero in Greece and Cyprus, where he is often referred to as a “hero-martyr”. Dionysis Savvopoulos dedicated an older song to him, “Ode to Georgios Karaiskakis”, while the lyricist Alkis Alkaios sang the song “Panda Gelastoi”.

Tassos Isaac’s child, who was left without a father following his death, was christened by Greek Minister of Foreign Affairs Theodoros Pangalos. The Greek government, as a token of gratitude for his services to Greece, decided to be the godparent of his beautiful daughter Anastasia.