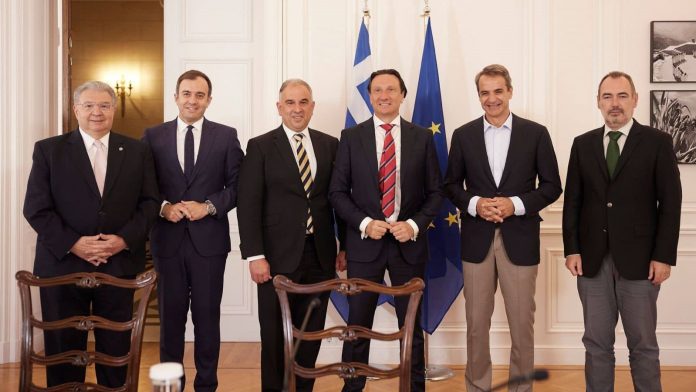 Greece’s Prime Minister, Kyriakos Mitsotakis, met with a delegation from the Greek Community of Melbourne (GCM), including its President Bill Papastergiadis and Treasurer Associate Professor Marinis Pirpiris, at the Maximos Mansion in Athens on Thursday, July 14.

During the meeting, special mention was made of the diverse and rich activities developed by the GCM, which focus on the preservation of the Greek cultural heritage and the support of Greek national issues.

For his part, Mitsotakis thanked the GCM for its leadership and expressed his appreciation for its efforts in promoting Greece’s modern image to Australia.

The Greek Prime Minister also focused on the relations of Greece with the diaspora, making special reference to the new digital services such as ‘My Consul Live,’ which are now available to expatriates to overcome chronic bureaucratic delays and provide faster and more efficient consular services.

Finally, Mitsotakis pointed out that the completion of a bilateral double taxation agreement is a priority of his government – a perspective of particular importance for the further deepening of bilateral economic relations with Australia and the promotion of mutual investments.

Mr Papastergiadis thanked in particular Mr Katsaniotis and Mr Chrysoulakis for the cultural and educational camp that recently commenced in Thessaloniki with over 40 young Greek Australian adults taking part.

The GCM President then pointed to the recent Victoria Government-funded Open Horizons exhibition at the Melbourne Museum and the partial involvement of the GCM, and then referred to the commitment of Minister Lina Mendoni to expand the cultural offerings of Greece to the diaspora.

Mr Papastergiadis also referred to continued conversations with the Tourism Office of Greece, as well as Enterprise Greece in terms of having a footprint in Melbourne.

Mr Papastergiadis noted the positive steps being undertaken by both governments on a double taxation agreement and the hard work of a subcommittee of Greek Australians who were providing input on the terms of such an agreement and a bilateral health agreement that would provide appropriate health cover for their respective citizens when abroad.

The meeting came to a close with discussion about a potential visit by the Greek Prime Minister to Australia.