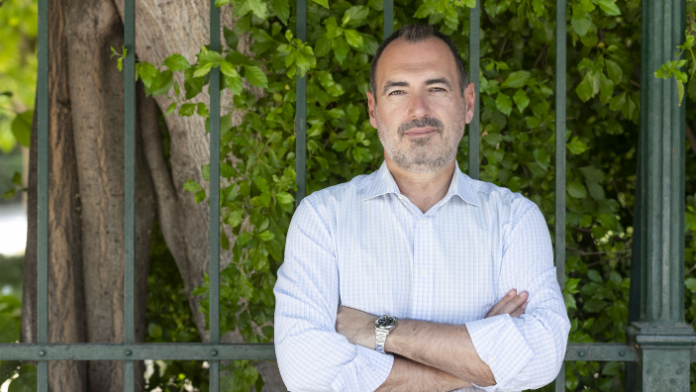 In an exclusive interview with The Greek Herald, the Deputy Minister of Foreign Affairs of Greece, responsible for issues of Greek emigration, Andreas Katsaniotis, expressed his pride for the efforts and the valuable work of the Greek community in Australia.

In his first interview with an expatriate newspaper since his first day of office last August, Mr Katsaniotis refers to a number of issues concerning our community and offers us news.

As he tells us, he is looking forward to his first visit to Australia while thanking The Greek Herald, which as he says, “is a mainstay of journalism something which clearly emerges from its 95 years of existence.”

“First I would like to emphasise that it is a special honour for me to assume the duties of the Minister of Foreign Affairs, responsible for expatriate Greeks. It is also a huge national responsibility.

“I believe that Greeks abroad are a leading national asset for our country, they give growth to our homeland and increase the level of our influence. Therefore, the government’s priority is to tighten the ties of the diaspora with the mother country. In this context fall our efforts for the maximum possible digitisation of the consular services of Greeks abroad.

“The digital transformation of the services of the authorities abroad is proceeding at an unabated pace, while the process of direct registration of documents by our consular officials is expected to operate at the beginning of the new year and greatly facilitate our compatriots,” said the Deputy Minister, who also spoke about the vote of the Diaspora.

“New Democracy over time as a political party and today as a government, supports the diaspora which is for all of us an extension of Hellenism that develops our nation.

“Diaspora is a pillar of preservation of tradition and a “bridge” of development prospects for our economy. Especially on the issue of expatriate voting, the government has attempted twice in the last 2.5 years to implement its strong pre-election commitment that is simple and clear: the possibility for all Greeks abroad, who are registered in the electoral rolls, of voting from their place of residence without any restrictions whatsoever.

“So instead of getting on the plane and coming to our country to vote, we want to give them the opportunity to exercise this inalienable right from their place of residence.

“Unfortunately, the Left has made unfounded obstacles to our willingness to institute an electoral process that would enable more Greeks to take part in it, which has led us to today’s compromised result.

“Look, the government has proven in practice that it will do everything to make it easier for all expatriate Greeks to participate in national elections from their permanent place of residence. But we have to be clear. A cross-party consensus is needed to fulfil this all-out demand. A majority of 200 MPs is required.

“But now the struggle is turning to the full implementation of the existing law, exhausting the many possibilities it offers. I have to inform you that last month I met with the Minister of Interior, Makis Voridis, in order to intensify the procedures for the information campaign of expatriates and for their better service through our consular authorities. But we also call on our compatriots abroad to make the appropriate mobilisation.”

An important issue for the diaspora is the agreement between Australia and Greece on the Avoidance of Double Taxation.

“The planning of negotiations for the conclusion of a double taxation agreement between Greece and Australia is a particularly positive development that will bring economic benefits and promote our country’s economic relations with Australia,” Mr Katsaniotis said.

“Negotiations are expected to begin within the next year. Of course, it will take time to complete them, but already through our Embassy in Canberra, we are working with the Australian authorities to ensure that this is done in the shortest possible time.”

Mr Katsaniotis also referred to his conversation with Archbishop Makarios of Australia.

“During my conversation with the Archbishop of Australia, Makarios, I conveyed to him the personal interest of Prime Minister Kyriakos Mitsotakis. I also conveyed my grief over the fire at the Cathedral of The Annunciation of Our Lady in Sydney. We were also given the opportunity to talk about the Archdiocese of Australia, but also about the dynamic part of Hellenism, which lives in this friendly country.

“His Eminence’s words moved me, since he spoke to me of his flock in Australia with much love and fervour.

“Here I should also mention the meeting I recently had with the Australian Ambassador in Athens, Athanasios Spyrou, who – himself a scion of Australian Greeks – exemplifies the special dynamics of the Greek element in Australia. After all, we are talking about a solid number of expatriates who are now reaching their fourth if not the fifth generation of their presence in Oceania. With the image of this Hellenism at heart I look forward to being given the opportunity to visit Australia, as soon as conditions permit. Of course, modern technology offers us other ways of communication, which we will have to use until then.”

Mr Katsaniotis also referred to the challenges facing Greece. “Greece’s position is geopolitically upgraded, the economy and businesses are on a growth trajectory while households see the realistic hope of further improving their income.

“At the same time, the government secured perhaps the bravest support package from the E Recovery Fund while the national plan “Greece 2.0” guarantees the growth leap that our country will make in the coming years.

“At the level of foreign policy and security, we respond decisively to every challenge from Turkey. At the same time, with coordinated actions we mobilised the international community by strengthening the diplomatic power of the country. We signed historic agreements that will help Greece grow, such as the demarcation of Exclusive Economic Zones with Italy and Egypt.

“We are building new alliances and strengthening relations with France with which we recently signed the establishment of a strategic partnership for cooperation in defense and security.”

Finally, he sent a message to the Greeks of Australia through The Greek Herald.

“First of all I would like to express to the Greeks of Australia through The Greek Herald the feelings of pride that I feel as a Greek and as an official of the Greek government for their action and work.

“Their ancestors travelled to this end of the world more than a century ago under extremely difficult conditions. Working hard both those of the first generation and their descendants, they not only managed to be a part of Australia’s social and working fabric, but also distinguished themselves at all levels by contributing powerfully to the country’s progress. All these people never forgot their homeland. Their country of birth. The land of their ancestors. Their connection with the church proves it.

“This is confirmed by their will to preserve the Greek language. Their inclusion in the communities and their presence in all events are evident. All of these are elements which are an example to follow. Let us all draw strength from the strength they have shown in difficult times to overcome the problems created by the pandemic and to be able to mingle soon, with new/renewed dreams for the future.

“On this occasion I would like to congratulate and thank you as a representative of the press and through you and all your colleagues who make communication between Greece in Australia easier. The Greek Herald is a mainstay of journalism as it emerges from its 95 years of existence.

“Warm congratulations and thanks for the opportunity to communicate with this precious part of Hellenism.