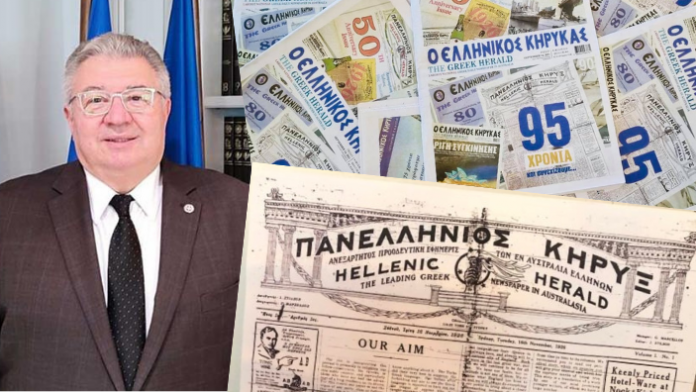 The Secretary General for Greeks Abroad and Public Diplomacy, John Chrysoulakis, has sent a letter of congratulations to The Greek Herald for being mentioned by NSW Multicultural Minister, Mark Coure, in Parliament.

In his letter, Mr Chrysoulakis said the mention of The Greek Herald in NSW Parliament “is an honour for the entire Greek community, both in its cultural and business dimension.”

To: Managing Director of The Greek Herald, Mrs Dimitra Skalkos

The extensive reference by the Minister of Multiculturalism, Mark Coure, to The Greek Herald recently in the NSW Parliament was particularly impressive.

It is an honour for all of you who work there and who have achieved the development of a truly historical newspaper into a modern expatriate medium.

What the Minister of Multiculturalism said in Parliament in his speech on the importance of community media and how they contribute to the multicultural character of Australia, constitutes the best recognition of the work done in the almost 100 years of the circulation of The Greek Herald.

But it is more important that emphasis was placed on the work being done today. This is an honour for the entire Greek community, both in its cultural and business dimension.

It is particularly encouraging that this great newspaper is presented as a model of the expatriate media, precisely because of the innovations in its business model and especially its increasing presence on the internet and social media. It is encouraging because in this way readers are drawn from the new generation of Greek Australians who preserve their national identity, cultural heritage and language.

By this logic, the contribution of the expatriate media both to the preservation of our own national identity and to the construction of Australia’s multicultural character is, as Mr Coure himself underlined, truly invaluable.

So it comes to mind what the late Theodoros Skalkos had said about The Greek Herald, which is absolutely confirmed: it is not just a Greek-speaking daily newspaper of Australia. It is for the historian of the future an auxiliary tool, as a cartographer of the events of our collective memory, of our political, social and cultural heritage, as they are recorded in its pages during the 96 years of its circulation.

Therefore, in view of the completion of one century of circulation, which is so close, I wish you from the bottom of my heart every success in your so successful course in the 21st century.