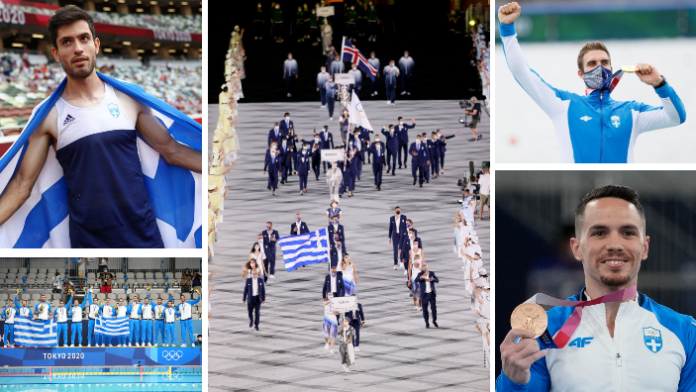 With the Tokyo Summer Olympics over for this year and the Paralympics set to begin in two weeks, The Greek Herald has decided to fill the gap in our television viewing with our top six Greek moments from this year’s Games.

1. The Opening and Closing Ceremony’s:

The was a strong Greek presence at both the Opening and Closing Ceremony’s of the Tokyo Olympics this year.

Greek flag bearers, Eleftherios Petrounias and Anna Korakaki, kicked off the Opening Ceremony as they proudly walked out first with the Greek flag, followed closely by the rest of the athletes.

Petrounias came out in a traditional black suit, while Korakaki and the other female athletes wore an elegant blue and white dress.

During the Closing Ceremony, the Greek flag was carried by the captain of the men’s national water polo team, Giannis Fountoulis.

As is tradition, the Greek flag flew proudly at the closing ceremony alongside the host country’s. The Greek National Anthem was also played loudly.

It was the first time Greece had ever won a gold medal in the rowing competition at the Olympics.

On his return to Ioannina in Greece, Stefanos was given a hero’s welcome as he did a victory lap around the city’s main square aboard an army Jeep, with a police motorcycle escort.

Ntouskos was also crowned with an olive wreath by Epirus Regional Governor, Alexandros Kachrimanis, and congratulated for this performance in the Tokyo Games by Ioannina Mayor, Moisis Elisaf.

For his part, Miltiadis Tentoglou won gold for Greece with his final effort in the men’s long jump.

He jumped 8.41 metres and was followed close behind by Juan Miguel Echeverria at 8.41m and Maykel Masso 8.21m.

After a nail-biting men’s water polo final, Greece claimed its first ever Olympic silver medal after losing to Serbia 10-13.

In the lead up to the gold medal match, Greece had won six of its seven games at Tokyo 2020, with the only exception a 6-6 draw against Italy in the preliminary round.

This was Petrounias’ second Olympic medal in his legendary career and Greece’s third medal during the Tokyo Olympics.

Greek Australians watched on the tennis quarterfinal as they cheered on both Maria Sakkari and Stefanos Tsitsipas from Team Greece and Ashleigh Barty and John Peers from Team Australia.

Ultimately Sakkari and Tsitsipas were defeated by the Aussie duo, 6-4, 4-6, [10-6], but it was still a fun and nail-biting game to watch.

READ MORE: Greek Australians among the 472 athletes to represent Australia at Tokyo Olympics.

All of these athletes made us proud as they played for Australia in their respective sports. Water polo players, Anthony and Lea, helped their teams to a number of victories as goalies.