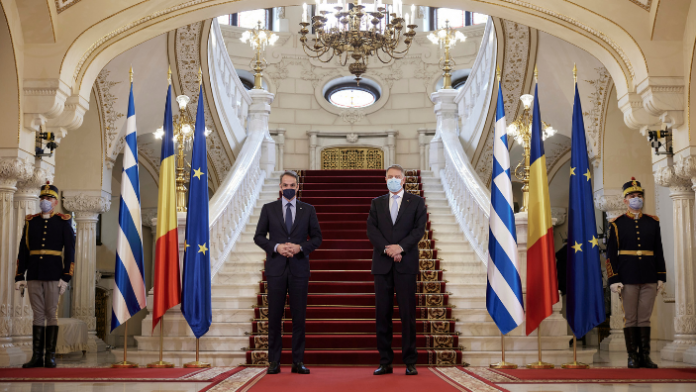 Greek Prime Minister, Kyriakos Mitsotakis, paid an official visit to Romania on Wednesday and met with the country’s Prime Minister and President to discuss bilateral relations and the current Ukraine-Russia crisis.

In his separate meetings with Romania’s President Klaus Iohannis and Prime Minister Nicolae-Ionel Ciucă, Mitsotakis discussed how to strengthen cooperation between Greece and Romania in the areas of economy and energy.

Mitsotakis outlined ways to increase and expand the Greek business presence in Romania and to promote bilateral economic and trade relations between the two countries.

The two countries’ shared perception of major European and international issues was also confirmed, while the leaders exchanged views on the latest developments in Ukraine.

Later, the Greek PM visited the Greek Embassy in Bucharest and met with the Greek-Romanian Chamber of Commerce.

Discussing the events in Ukraine, Mitsotakis said that it was an issue of concern to all but especially Romania, which neighbours Ukraine.

“It also concerns the entire world, however, because no change in borders through violence can be tolerated, even more so by a country that has placed international law at the centre of its foreign policy,” Mitsotakis said.