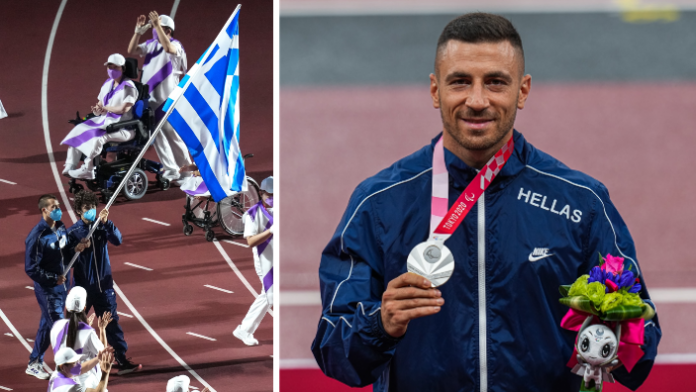 Tokyo has farewelled the Paralympics after 12 days of competition, and the Games have been celebrated at a musical and emotional closing ceremony.

International Paralympic Committee President, Andrew Parsons, said “arigato” (thank you) to Tokyo, and declared that the Paralympics were not just historic, but “fantastic.”

The Paralympic flame was then put out, and the flag was handed to Paris to hold until the next Games in 2024.

In total, Greece claimed 11 medals – 1 gold, 3 silver and 7 bronze. Three of these medals were won during the last weekend of the Games. Here’s a look back at those incredible moments.

Stamatopoulou, who has a rare neurological disorder called Stiff Person Syndrome, finished the race with a time of 49.63, earning her the bronze medal.

Liu Yu and Zhou Yanfei, both from China, won the gold and silver medals in the event, respectively.

Stamatopoulou has been swimming on the international stage since 2013, and currently works as a speech therapist.

The Greek boccia team won the bronze medal at the Games on Saturday in what was the tenth medal for the country during the Games in Tokyo.

Grigoris Polychronidis and team members, Anna Ntenta and Anastasia Pyrgiotis, took home the bronze medal after beating out the South Korean team with a score of seven to one during the bronze medal qualifying match.

Boccia is a precision ball sport similar to bocce, and related to bowls and pétanque.

Polychronidis also won the silver at boccia during his personal event on Wednesday.

Greek athlete, Athanasios Prodromou, claimed the silver medal in the men’s long jump event at the Tokyo Paralympics on Saturday.

Prodomou’s jump of 7.17 metres broke the athlete’s personal record and saw him win Greece’s 11th and final medal from the Games.

Abdul Latif Romly from Malaysia took home the gold medal with a jump of 7.45 metres, and Nicholas Hum from Australia won the bronze medal with his long jump of 7.12 metres.

During the event, Prodomou was also hailed for his sportsmanship after her rushed to help Romly who was injured during his fifth jump.

Prodomou didn’t hesitate when he saw his fellow athlete hold his leg in pain after landing his jump, and the Greek athlete even rushed to his competitor’s side before the paramedics.

“Congratulations to our Paralympians!” Greek Prime Minister, Kyriakos Mitsotakis, said in a Tweet at the end of the Paralympic Games.