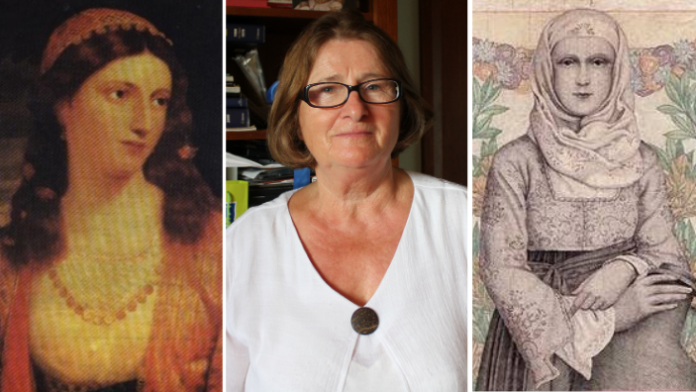 “Although we can’t support that women played the leading role in the Greek War of Independence, it would be very wrong to say that they didn’t make important contributions. In some cases, they contributed as much as men, and sometimes even more than men,” Dr Panayota Nazou tells The Greek Herald at the start of our insightful interview.

Most of us know something about Greek women contributing to the War of Independence, but not much. Luckily for Dr Nazou, when she conducted research for a lecture she gave to commemorate the bicentenary of the Greek Revolution titled Women of ’21, she was able to uncover much more detailed information.

The Affiliate Academic at the University of Sydney’s Department of Modern Greek and Byzantine Studies, says while it was difficult at first to find primary sources describing the role of Greek women during the 1821 Revolution, she never gave up and this persistence paid off in the end.

“But of course, the main sources which brought these heroines to light were women. Educated women who, during the second half of the 19th century, were involved in Greece’s women’s movement and the education of women in Greece and began to publish periodicals and newspapers.”

Callirrhoe Parren was one of these educated women who released the first Greek women’s newspaper, ‘Εφημερίς των Κυριών,’ in 1887. Several women wrote about the heroines of the Greek Revolution in this newspaper including Sotiria Aliberti, who released the first book in Greece titled ‘Heroines of the Greek Revolution’ in 1933. Another woman, Koula Xeradaki, also dedicated 50 years of her life to uncovering the role of Greek women during the Revolution and published her book ‘Women of 1821’ in 1995.

“There were also some men who say something about women, but it’s kind of like a ‘by the way this happened as well.’ These dates show that we properly started to learn about the women’s role during the Greek Revolution quite late,” Dr Nazou says.

One group which appeared consistently in all of Dr Nazou’s research were the Souliotisses. The Souliotes were a ‘warlike people’ who were involved in two wars with Ali Pasha in 1792 and 1800 – 1804 and consequently, were said to inspire the actions of many women during the Greek Revolution in 1821.

“The Souliotisses were like Spartan women. They were trained to use weapons and during the war, they took up their armour,” Dr Nazou says.

In one account of the first war between the people of Souli and Ali Pasha’s army, this bravery became especially clear through the actions of the little-known Souliotisses, Moscho Tzavela and Haido Giannaki Sehou.

“In the middle of the battle, the sounds of fighting stopped. The Souliotisses thought everyone had died so they charged the battleground, with Moscho at the front and Haido at the back, some carrying rocks and others carrying weapons. The men were given courage and together they slaughtered the Ottomans. About 2-3,000 Turks died that day and only 74 Souliotes,” Dr Nazou explains.

“Ibrahim wrote that the women held hands and danced as, one by one, they threw their children from the cliff of Zalongo before jumping after them themselves. So this event was written and heard throughout Europe and these women became a symbol of self-sacrifice for their country,” Dr Nazou says.

But interestingly, Dr Nazou adds that there are two other ‘Zalongos’ which are not as well documented.

“200 women and girls feel from a cliff at Riniasa (Souli) and we don’t even know much about it. There’s also a third instance in Naousa at the Falls of Arapitsa in 1822. These were all recorded in folk songs,” she says.

Just as well known as the Dance of Zalongo are two popular Greek heroines who fought in the 1821 Greek Revolution – Laskarina Bouboulina and Manto Mavrogenous. Both spent all their fortune for the Hellenic cause, with Bouboulina becoming a naval commander and Mavrogenous providing a number of ships for the war.

“These two are so well-known not only because they gave everything for the Greek Revolution, but because they were also personalities. They were rich women, they had power but also courage and determination. Other women didn’t have those advantages,” Dr Nazou says.

One such woman was Panoria Xatzikonstanti the Psorokostaina. According to folk tradition, Panoria was the wife of a merchant from Asia Minor (Kydonies). One day, the Ottomans killed her husband and took her four children, but she escaped and went to Nafplio, where she became a beggar.

“With the money she collected from begging, she would feed and care for the orphans from the war in the Peloponnese. When Ioannis Kapodistrias arrived in Greece, he quickly built an orphanage and ‘Psorokostaina’ asked him if she could work there, without being paid, to take care of the orphans,” Dr Nazou explains.

“She gave whatever was most valuable to her, her love and care, as well as her silver wedding ring, for these orphans and for the liberation of Greece.”

And she wasn’t the only one. Dr Nazou lists a number of other well-known, rich Phanariot women and unknown Greek women, such as Elizabeth Ypsilantis and Magiro Zarafopoula, who were members of the Filiki Eteria – a secret organisation which was tasked with overthrowing Ottoman rule of Greece and establishing an independent Greek state.

“These women contributed in many ways, such as organising secret meetings for members of the Filiki Eteria, organising fundraising appeals and also distributing secret and official documents to members. It was a very dangerous and important role,” Dr Nazou concludes.

Important enough for these women to be memoralised in our article as a means of celebrating their leadership, courage and determination during the Greek War of Independence.