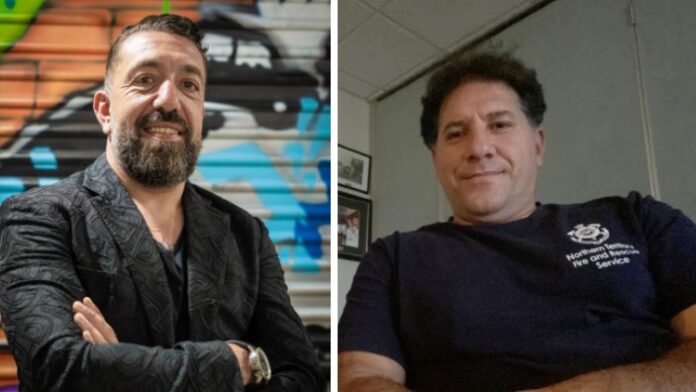 The Governor-General has today announced Australian Bravery Decorations to recognise the courage and service to the community of 111 Australians.

Among those recipients are two proud Greek Australians – Manny Koulakis from the Northern Territory and Nicholas Karagiannis from New South Wales.

According to the Governor-General, these men have been awarded as “they were brave, they did not hesitate and their actions made a difference.”

“On behalf of all Australians, I thank each recipient for their action and congratulate them on the recognition that they are receiving today,” the Governor-General added.

To find out exactly what brave act they carried out, The Greek Herald decided to reached out to both Manny and Nicholas and this is what they had to say.

Manny Koulakis, along with Peter Stacey Simon and Scott Douglas Burrows, have been recognised with the award of the Group Bravery Citation for their actions during the rescue of two people at East Point in Darwin, Northern Territory on December 3, 2006.

At 48-years-old, Manny has been a firefighter at NT Fire and Rescue Service for 26 years. But he tells The Greek Herald he will never forget that fateful day back in 2006.

A man had been swept into rough seas at East Point and a woman went to assist him. The pair were thrown against some rocks and became separated. Despite the treacherous conditions, a passerby (Scott Burrows) swam to the unresponsive woman and attempted CPR without success. He then swam to the semi-conscious man and managed to hoist him onto the rocks, where he was later taken to hospital.

“When we arrived, I saw a middle-aged man already being attended to by ambulance officers. But the next thing that was obvious to me was a young child, probably about 10 years old, and I could see that he was frantic, pacing up and down on the cliff. He was always looking at the sea, so we knew that there was someone else in the water,” Manny tells The Greek Herald.

Manny and Peter Simon quickly decided to enter the dangerous water and swam to the unconscious woman and brought her to shore. Sadly, the woman wasn’t able to be revived.

“We tried our very best and I think that’s the most important thing – for everyone looking, especially the child, to see that people cared and we tried our best,” Manny says.

“At the time, it was instinctive. In the line of work that I do as a firefighter, it’s part and parcel of my job. But I think in today’s age of mental health awareness, not only do we need to help and care for people, but we also need to be seen to be caring for people. To show bystanders that humanity still exists.”

Nicholas Karagiannis from Lidcombe has been commended for brave conduct for his actions during the rescue of people from a house fire at Homebush in NSW on November 9, 2014.

Nicholas tells The Greek Herald how he was returning to his workplace at midday on that fateful day, when he noticed plumes of black smoke billowing from a house close by. He raced down the street towards the burning house and once there, he saw two metre high flames engulfing the building.

“I knew the residents who lived there – there was the grandma, grandpa, daughter and granddaughter. I saw the grandma grab a garden hose and run back into the house in an attempt to put out the flames,” Nicholas explains.

“So I ran in after her and quickly pulled her to safety just one minute before the roof of the house came in.”

Emergency services arrived soon after to fight the fire, which caused extensive damage to the house, but Nicholas says in that moment he didn’t even consider waiting for help to arrive.

“Anyone else in my situation would’ve done the same thing. At the time, it was about her safety and welfare. Even now, I still visit them from time to time.”