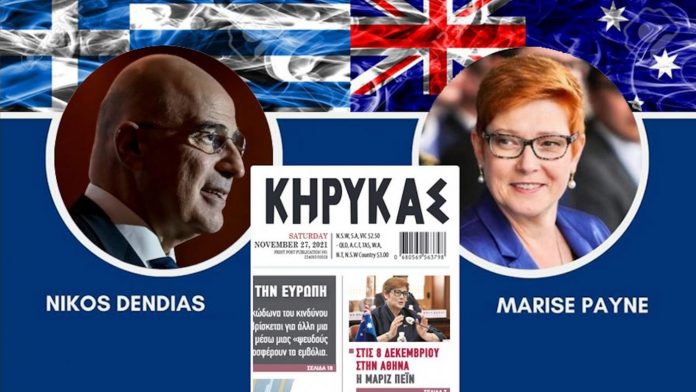 As The Greek Herald first announced in November 26, Australian Foreign Minister Marise Payne has arrived in Athens and is set to meet with Greek counterpart, Nikos Dendias.

The discussions, expected to be held on Wednesday December 8, at 12pm (Greek time) will focus on the strengthening of bilateral cooperation, on the coordination between the two countries in International Organizations, on developments in Greece’s broader neighbourhood and in the Indo-Pacific region, as well as on the Greek Diaspora in Australia as a link between the two states.

According to The Greek Herald‘s sources, Ministers Payne and Dendias will also discuss the double taxation agreement between both countries which is expected to be finalised by 2022.

The extended talks will be followed by joint statements later in the afternoon.

Earlier this year, Minister Payne held her first telephone conversation with Greece’s Foreign Minister, Nikos Dendias. The talks held in October between the two top officials focused on their shared commitment to the International Law of the Sea, to the protection of the environment and to regional developments.