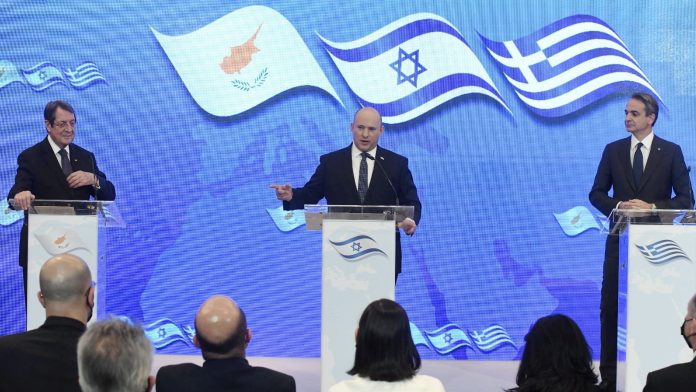 Greece has agreed to strengthen its cooperation with Israel and Cyprus at the eighth trilateral summit in Jerusalem on Tuesday.

“Israel, Greece, and Cyprus view the energy sector, and in particular, natural gas and renewable energy, as a solid foundation for cooperation in the region, based on international law…,” the leaders say.

“The ongoing turmoil in our region has triggered unprecedented migratory flows that pose challenges and can only be met by multilateral, multifaceted action,” they said.

“We express the importance of respecting sovereignty and sovereign rights in the Eastern Mediterranean and the Aegean Sea and to preserve the stability in this region.”

The leaders also reaffirmed plans to connect their countries with a 2,000-megawatt undersea electricity cable.

The leaders signed an agreement to speed up the construction of the EuroAsia Interconnector (EAI) project in March.

All three say they remain committed to their cooperation with the US under the 3 + 1 scheme.

They also reiterated their “full and unwavering support” to settling the Cyprus problem – an everlasting dispute between Cyprus and Turkey including over territorial rights in the Aegean Sea and energy exploration rights in the eastern Mediterranean.

The next trilateral summit will be held in Cyprus in the latter half of 2022.