On This Day: The Lady of Ro, Greek WWII resistance figure, dies 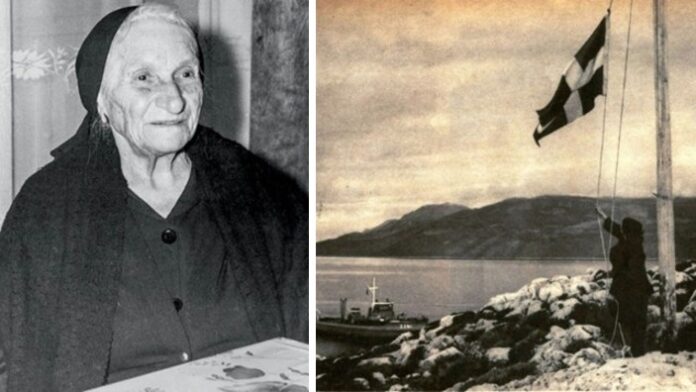 On this day in 1982, Despina Achladiotou, known as the Lady of Ro, passes away.

Achladiotou is best-known for flying the Greek flag over Ro daily from sun-up to sun-down during occupation in WWII.

Today marks the 39th anniversary of the passing of a Greek heroine and “symbol of defiance”. The Greek Herald takes a look back at her brave life.

Achladiotou sailed with her husband, Costas Achladiotis, and her mother to Ro in the 1920s to work as farmers and breeders. She awoke one morning in 1927 to find a Turkish flag hoisted on the island.

She began raising a flag she sewed herself from a white sheet and blue cloth and displayed it for passing ships as a small but impactful act of defiance for the first time in 1927.

This wasn’t the only time Despina saw fit to intervene against Ottoman imperialism. It’s said she also helped the Sacred Band/Allied Powers against the Axis powers during the occupation of the Dodecanese.

Ro at the time was a ‘tragic’, small rocky outcrop a stone-throw away from Turkey’s southern coast. Ro was a desolate haven for refugees often referred to as “barren” and “inhospitable” during this period. The Lady of Ro found solance in Ro’s history as a lost part of ancient Lycia.

Ro remained the only and permanent resident of the island, braven-faced as most others fled increasing threats from the Axis powers during WWII.

“… of course life in Ro [was] not so pleasant, but you feel more Greece, lost as you are in the sea, a few hundred meters from the Turkish coasts,” she recalls in a rare interview with and tribute by the late journalist Freddie Germanos for ERT.

Achladiotou braced Turkish forces with nothing more than a home-sewn flag for the next 20 years until the Treaty of Paris and the ‘Koundouriotis’ destroyer facilitated the return of Kastelorizo, and the broader Dodecanese area, to Greek ownership on February 10, 1947.

Kastelorizo became the seat of the Allies, who when they heard of a woman living on the opposite islet, sent sailors to greet her and gift her food and supplies.

She continued to raise the flag every day until she left in 1961.

She returned in 1974 to again replace a Turkish flag placed by Omar Kasar. The anti-submarine vessel G. Pezopoulos arrived in Kasterlorizo as a tribute for the Lady of Ro on the September 1, 1975. Two months later, on 23 November, the Ministry of National Defense sent a naval convoy and a delegation of the Navy to award her a medal for the war period of 1941-1944.

Her legend began to spread from Kastellorizians to wider Greece by the mid-1970s when she was rewarded full military honours by Greece, including from the Academy of Athens, the Navy, the Greek Parliament, the Municipality of Rhodes, the National Bank of Greece, and other bodies.

“With the Greek flag raised and the love for Greece deeply rooted in me, I went through all the hardships,” she told Freddie Germanos.

“I want to be buried with the Greek flag,” she went on to say. So it was. Her coffin is adorned with the flag in Ro, a town she became synonymous with and contributed highly to the development of. Ro now hosts a military unit.

Her legacy survives as part of the long and complicated history of Turkish-Greek territorial disputes.

The former Deputy Foreign Minister of Greece. D Droutsas, visited her tomb on May 24, 2013. The Lady of Ro, a play written by Giannis Skaragas, directed by Katerina Bertheka, performed by Fotini Baxevani, and produced by the Lykofos company, was touring Australia in early 2020 just prior to the coronavirus (COVID-19) pandemic.

Achladiotou is a household-name in Greece and is known today for her bravery and patriotism as “Ro’s wife”.