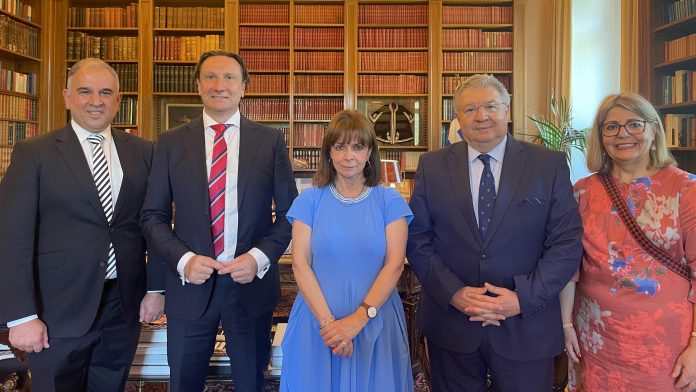 Greece’s President, Katerina Sakellaropoulou, welcomed a delegation of the Greek Community of Melbourne (GCM) to Athens on Thursday, July 7.

The delegation was made up of the GCM President, Bill Papastergiadis OAM, Treasurer, Associate Professor Marinis Pirpiris, and Assistant Secretary, Vicky Kyritsis.

In attendance at the meeting was also the Secretary General for Greeks Abroad and Public Diplomacy, John Chrysoulakis.

During the meeting, Mr Papastergiadis provided a summary of the GCM’s recent programs and activities, including the GCM’s support of the very successful National Archaeological Museum of Athens exhibition Open Horizons at Melbourne Museum; the recent lighting yet again of the Greek Centre in red to commemorate the Pontian Genocide; the current establishment of the Hellenic Chair in Global Diasporas at the University of Melbourne; the impending installation of the replica Parthenon Frieze stele on the Greek Centre building in the coming months; and the Summer Camp program that is co-funded by the GCM and the Greek Foreign Ministry that commences on July 9 in Thessaloniki with an initial intake of 45 Greek Australian youth.

Ms Sakellaropoulou congratulated Mr Papastergiadis and remarked that she was pleased with the unity amongst organisations that operated in Australia and in particular in Melbourne.

Mr Papastergiadis also briefed Ms Sakellaropoulou on what the GCM believed were areas that required further bilateral focus between the two countries including education and in particular, the recognition of tertiary qualifications, enhancing the cultural program offered to diasporic communities of the Greek Ministry for Culture, and the ongoing discussion between our two Governments on an agreement regarding Double Taxation.

Ms Kyritsis added to Mr Papastergiadis’ summary by informing Her Excellency about the work of the Lemnos Gallipoli Commemorative Committee and in particular, its support of the new Lemnos Remembrance Trail project, an initiative of the Australian Government, working in conjunction with the Hellenic authorities, recognising Lemnos’ part in the Greek link to Australia’s ANZAC story through both wars.

Further to the briefs provided by his colleagues, A/Prof Pirpiris highlighted to the Hellenic President the strong communication channels established between the leaders of the GCM and the political leadership at both the State and Federal levels. He noted how useful such channels have proven during the recent COVID-19 pandemic in addressing issues related to misinformation, disinformation and vaccine hesitancy.

A/Prof Pirpiris also heralded the success of the GCM’s Education program and in particular that of Alphington Grammar School – the GCM’s bilingual day school which was providing Greek language, history and cultural programs to the diverse student group. It was rewarding to see so many students of non-Greek background embracing the language, ideals, and traditions of our rich Greek society.

Finally, he also took the opportunity to thank Her Excellency for her support of the recent Evzones’ visit to Melbourne, which was enjoyed by large numbers of the community

President Sakelloropolou was pleased that the GCM was committed to sharing the Hellenic language and its culture with so many young individuals of non-Greek origin and commended the GCM on their cultural outreach programs.

She was also complimentary of the close and harmonious relationship between the GCM and the Hellenic Government and was interested in growing the number of programs, including exchange programs between Greece and Australia in the coming years.

After the meeting, Mr Chrysoulakis said: “I had the pleasure of accompanying the GCM delegation including GCM President Mr Papastergiadis to the meeting with the President of the Republic. The relationship with the GCM, the programs that we share and have commenced and those that we plan for the future are in the best standing for the last 20 years. A fact that was acknowledged by the President of the Republic. United and with close cooperation with the GCM we will be very successful.”

Finally, Mr Papastergiadis thanked President Sakellaropoulou and enquired about whether she was considering a trip to Australia for which she would be most welcome and well received.

Ms Sakellaropoulou responded that she was interested in visiting Australia and the Greek community there.