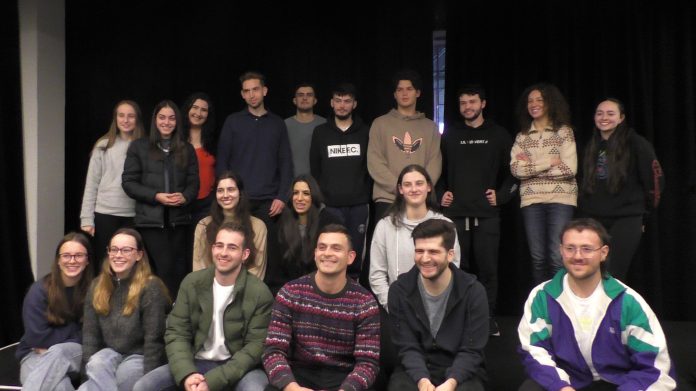 With only just a few weeks to go, a number of the campers from the 2022 Greek Summer Camps program gathered at the Greek Centre in Melbourne for a final briefing before they headed out to meet their interstate mates on July 9 in Thessaloniki.

The program, which is led in Australia by the Greek Community of Melbourne (GCM), received over 180 applications in a very short window and have selected a cohort of 49 young Greek Australians between the ages of 18 to 25 to be the first group to try out this latest version of the cultural camp.

The group were led through a soft induction by GCM camp coordinator, Meg Smith, and were addressed by GCM Board member and chair of the GCM Education committee, Dr Nick Dallas, on the opportunity and expectations the group should set.

Fellow Board members, Tas Sgardellis and Dean Kotsianis, were also in attendance to help send off the group which, in the youngest member of the GCM Board Dean’s case, also includes him.

The Camp commences on July 9 in Thessaloniki and is being funded by the Greek Ministry of Foreign Affairs, the Greek Community of Melbourne and each camper is paying €20 per day. The group will visit Ancient Vergina, the historic village of Nymphaio, the White Tower, Archaeological, Dion Mt Olympus and enjoy workshops, concerts and of course, beach time.

Greek Centre Director, Jorge Menidis, who was also on hand to farewell the group, said: “It’s a wonderful opportunity that the GCM hopes will be an ongoing project.

“The camp convenors – the Thessaloniki YMCA – run over 90 camps per year so we are confident they know how to tailor the experience for this group,” Menidis added.

“We look forward to hearing about their experiences, their stories, seeing their photos, and videos upon their return.”

The Greek Summer Camp 2022 is partially subsidised by the GCM and The Foreign Affairs Ministry of Greece.