‘Greece should become a global educational destination’: Papastergiadis at the Delphi Economic Forum 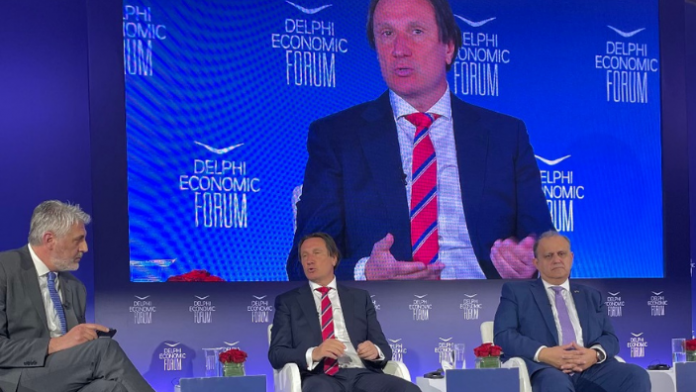 “Greece with its rich history and culture should become a global educational destination,” said Bill Papastergiadis at the Delphi Economic Forum this week.

Papastergiadis was a speaker alongside Nick Lairgakis and Jimmy Kokotos, which focused on the topic of the contribution of the diaspora to structural change in Greece.

Papastergiadis said: “now is the time to invest in the development of different programs at university level particularly in the humanities areas, which not only will help with Greece’s economy but it will also increase its influence globally.”

Papastergiadis noted that the education sector in Australia at the tertiary level pre-COVID contributed $32 billion to the economy with over 700,000 students and 130,000 people employed in this sector. The contribution of the education sector at tertiary level in Australia is comparable to the value of tourism to Greece which at pre-COVID was $37 billion.

Greece has already made some strides in its tertiary education sector but a concerted effort in developing courses and degrees in the English language that sit alongside the Greek language would be imperative in numerous faculties including science, medicine and architecture.

As is the case currently in Australia, Greece could become a global destination in education given that it has all of the prerequisites needed including its rich culture heritage and its deep history.

Bill Papastergiadis said by bringing together its history from ancient Greece to modern practices and by investing further in the humanities faculties, students will be attracted globally.

In particular, BJP said “research units on the Greek Diaspora should be established in different universities throughout Greece including Athens, Crete and Thessaloniki. These centers in Greece would work with other universities globally and in particular, the new Greek Community of Melbourne Centre for the Hellenic global diaspora at Melbourne University and the La Tobe University Greek program.”

Equally, bilateral agreements are required between Greece and other countries along with its universities so that, there is an exchange of teaching staff and students. It would be important to have for instance, students from Australia studying in Greece who could have that course work being recognised in their degrees in Australia.

Further, Greece should also invest in expanding its teaching programs to include additional courses on Greek language and culture taught in English to attract foreign students.

Using Australia as an example, Papastergiadis noted that the government plays an important role in the development of our multicultural and cosmopolitan society.

Papastergiadis noted Federal and State Government funding on initiatives by the Greek Community of Melbourne including its festivals, educational programs, university initiatives, new cultural centres and the replicas of the Parthenon marbles to be installed in the near future at the Greek Centre.

All of the above demonstrates how Government can work with the community and how now is the time for Greece to embrace its diaspora and work with communities globally. Many of the Greek Communities globally work with their respective Governments on policy matters. This too has been evident in relation to the support of the Australian Federal Government of Greece on the Eastern Mediterranean crisis and recently Agia Sophia.

It was believed that the Greek diaspora may not continue to grow post the second war migration from Greece, but the recent economic crises led to over half a million Greeks leaving Greece and many of them migrating to Australia. This highlights the continued relevance of the diaspora and the need to offer voting rights to citizens no matter where they reside.

The Greek Community of Melbourne will continue to work alongside the Greek Government and repeat its offers to house officers of Enterprise Greece and the Greek Tourism Office in its 15 story Cultural Center.

The Greek Community of Melbourne is also now working with the Greek Government and the Australian Government on a double Taxation Agreement and a Bilateral Health Agreement.

Bill Papastergiadis says: “A connected cosmopolitan world is one which Greece needs to embrace and the diaspora will stand beside it in its journey.”