‘A story of friendship that needs to be told’: Minister Gee on Lemnos Remembrance Trail 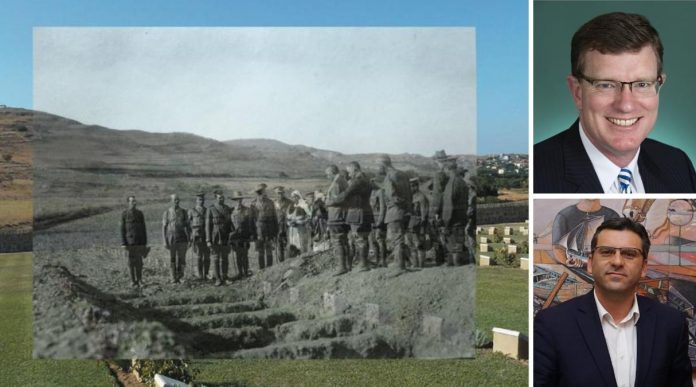 By Ilias Karagiannis and Argyro Vourdoumpa.

The historical imprint of the Gallipoli campaign during the First World War is so significant that the events of that time have firmly resisted the ravages of time.

Through the testimonies of the past, historical memory is not lost in inexorable oblivion, and thus younger generations can understand the magnitude of the sacrifices of their ancestors.

A monument that will be the material evidence of the historical narrative of that troubled era is to be financed by the Federal Government of Australia on the island of Lemnos, as reported first by The Greek Herald hours after the federal budget was delivered.

About $4.9 million will be provided to build the Lemnos Remembrance Trail on Lemnos in order to honour the sacrifices of Australian soldiers, doctors and nurses who found themselves on the Greek island during the Gallipoli campaign.

The project, that will further enhance the close ties between Australia and Greece will be delivered by the Australian Department of Veterans’ Affairs (DVA) and maintained by the Greek Government upon its completion, as agreed in a Memorandum of Understanding signed by the two countries.

To find out more about this initiative, constructions for which are expected to begin in July 2022 and conclude in the middle of 2023, The Greek Herald spoke with the Australian Veterans’ Affairs Minister, Andrew Gee, and the Mayor of the island of Lemnos, Dimitris Marinakis.

Minister Gee: “A story of friendship between Greece and Australia that needs to be told”

Minister for Veterans Affairs, Andrew Gee, described the Remembrance Trail on Lemnos as “a significant project that will help Australians better understand, and honour, the service and sacrifice of Australian diggers, nurses and doctors who served at Lemnos with great distinction during the First World War.”

“Lemnos played a key role in the Gallipoli campaign for Australia and New Zealand, and our allies. It was a staging and support base, as well as a place of care for our sick and wounded. An estimated 50,000 Anzacs passed through Lemnos over the course of the campaign,” Mr Gee continued.

“It’s a story of friendship between Greece and Australia that needs to be told.”

In 2019, the Government provided $500,000 to fund a scoping study to develop initial concepts for the project.

“Now that we have completed this study, consultation with the Hellenic Government of Greece, the Greek community in Australia and the community of Lemnos, we are now in a position to go ahead with construction of the Remembrance Trail,” Minister Gee said.

The ‘Remembrance Trail’ will help visitors tour the sites of the island where their Australian ancestors went, while at the same time explaining in detail the historical significance of specific areas of the island.

“The ‘Trail’ will exist in digital form, which means that people from all over the world will be able to explore it,” Minister Gee explained.

Mayor of Lemnos, Dimitris Marinakis, also spoke about the decision of the Australian Government to invest in the construction of the Remembrance Trail.

“This decision underlines the close historical relations of Lemnos with Australia and the lively interest that exists today in highlighting important aspects of our common history. The passing through of the Anzacs in Lemnos is an important aspect of the island’s history,” Marinakis said.

“The relationships that formed between the Anzacs and the local community are still very much alive and we thank the Australian Government, the Australian Embassy in Greece and all the Associations who have supported and keep supporting initiatives like this.”

“We look forward to seeing this ambitious project completed and we are sure it will become a pole of attraction for visitors and an important part of other points of interest on the island related to Anzacs like the Allied Cemetery of Mudros or the Portianos Military Celemetery,” the Mayor said.