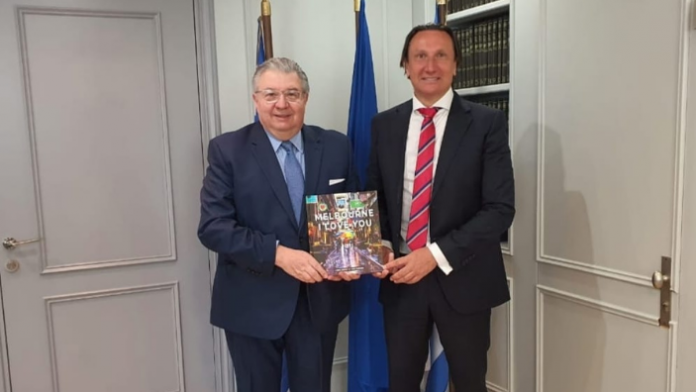 During the meeting, issues of concern to the Greeks in Australia were discussed, as well as the potential to hold Greek language programs for the diaspora during this year’s summer season.

Bilateral agreements between Greece and Australia in the areas of healthcare, tourism and investment were also talked about.

It was also agreed during the meeting that the Greek government’s learning platform, staellinika.com, will soon be available for use by individuals and expatriate schools across Australia.

This learning platform is a collaboration between the General Secretariat for Public Diplomacy and Greeks Abroad in partnership with the SNF Centre for Hellenic Studies at Simon Fraser University in Canada, and supported by the Stavros Niarchos Foundation.

On the day, Mr Chrysoulakis also invited Australia’s doctors and medical professionals of Greek heritage to attend the 1st Hellenic Diaspora Forum to be held in Thessaloniki on July 15 this year.

Mr Chrysoulakis concluded the meeting by assuring Papastergiadis that the Greek government is and will remain as close as possible to the Greek diaspora in Australia.