‘Not much respect for him’: Djokovic takes aim at Nick Kyrgios 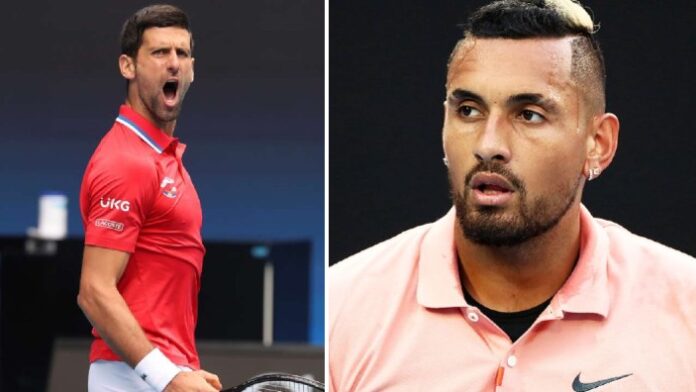 The simmering tennis feud between Novak Djokovic and Nick Kyrgios has exploded ahead of the Australian Open, with the world No.1 declaring “I don’t have much respect” for the Aussie star.

Speaking in his pre-Australian Open press conference, Djokovic was asked what he thought about Kyrgios calling him “a tool” on Twitter in mid-January.

The name-calling came after Djokovic made a list of requests to Tennis Australia and the Victorian government for tennis players stuck in hard hotel quarantine.

“Off the court, I don’t have much respect for him, to be honest. That’s where I’ll close it. I really don’t have any further comments for him, his own comments for me or anything else he’s trying to do,” Djokovic said.

As for Kyrgios’ on-the-court antics, Djokovic is far more willing to lavish praise on the controversial 25-year-old star.

“I think he’s good for the sport. Obviously he’s someone that is different. He goes about his tennis, he goes about his off-court things in his own authentic way. I have respect for him,” Djokovic said.

“My respect goes to him for the tennis he’s playing. I think he’s a very talented guy. He’s got a big game. He has proven that he has a quality to beat any player really in the world in the past.”

The feud between the pair dates back to a 2019 podcast, where Kyrgios described Djokovic’s “sick obsession” with wanting to be liked.

Djokovic and Kyrgios have only played each other twice, both in 2017 (at Indian Wells and Acapulco) and both times the Australian won.