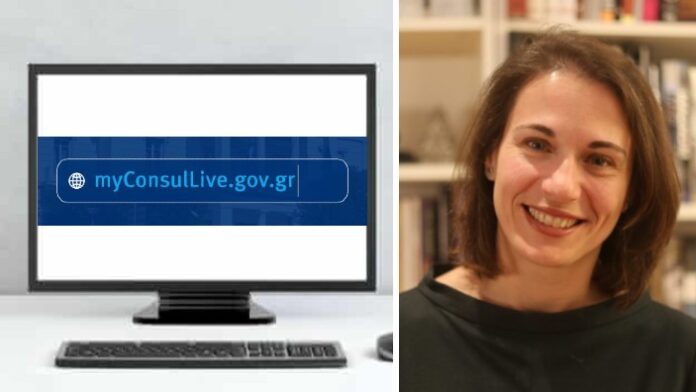 A pilot version of digital platform, myConsulLive, has officially been launched at the Greek Consulate in Perth to offer diaspora a fast and easy way to communicate with officials and apply online for documents and certificates.

Consul in Perth, Ms Georgia Karasiotou, tells The Greek Herald that the program has been going well so far and it is expected to be rolled out across Australia in the near future.

“More than ever in the last year, we have realised how useful and necessary it is to be able to do some work remotely,” Ms Karasiotou says.

“It is true that many of the transactions of the Consulates cannot be done without the physical presence of the citizen concerned, for example, the issuance of a passport or a notarial deed. There are others, however, where the services our fellow citizens need can be done by utilising the means technology gives us, such as the issuance of some certificates or photocopies of acts.

READ MORE: Greek Consulate in Perth one of the first to be digitised in new Greek pilot program.

“This is the philosophy of myConsulLive, which is a personalised service in the sense that the appointment via teleconference gives, on the one hand, the citizen the opportunity to provide the required proof of identity and on the other hand, to communicate directly with a Consular Officer.

“But the obvious, big advantage of myConsulLive is that for some services our fellow citizens will no longer need to take leave from work or travel to visit the Consulate.

“For Western Australia, which is half the size of Europe, but also for the whole of Australia, this is a great relief. That is why, starting from Perth, the platform is expected to operate in the rest of our Consulates in Australia in the near future.”

Greek Prime Minister, Kyriakos Mitsotakis, was briefed on the first steps of the digitisation of consular services abroad at an e-meeting he held with the Greek Consulate General in New York back in December 2020.

Since then, the Perth Consulate, along with the Greek Embassy in London and Greek Consulates in New York, Toronto, Canada, Boston, Istanbul and Dusseldorf, have all been digitised.

RELATED: Georgia Karasiotou: ‘No matter how far we are, Greece is always in our hearts’.