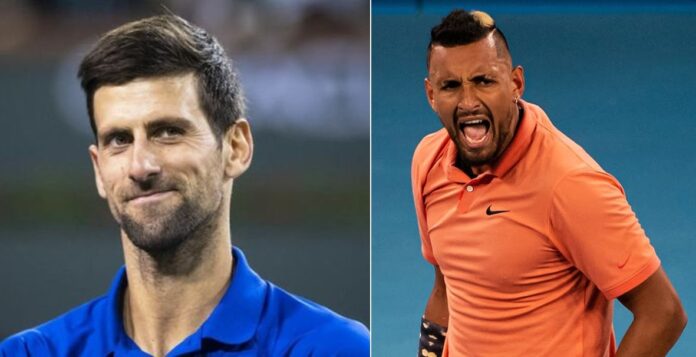 Nick Kyrgios has yet again taken to social media to hit out at World No.1 Novak Djokovic after he released a set of six demands for Australian Open players currently stuck in hotel quarantine.

There are currently 72 players confined to their hotel rooms, unable to access the five hours of practise time and training others can.

Kyrgios, ranked 47th in the world, took to Twitter on Monday night to slam the World No. 1.

“Djokovic is a tool,” Kyrgios wrote while sharing a news report.

Kyrgios also hit out at Bernard Tomic’s girlfriend, Vanessa Sierra, who complained about ‘having to wash her own hair’.

“I don’t mind Bernie but his Mrs obviously has no perspective, ridiculous scenes,” Kyrgios wrote.

Kyrgios has previously shown annoyance at Djokovic’s ‘relaxed’ attitude towards the coronavirus disease. In June 2020, the height of the COVID-19 pandemic in certain countries, Djokovic was caught dancing in a nightclub with other US Open tournament players.

“Prayers up to all the players that have contracted Covid- 19,” Kyrgios said, retweeting a video of the players dancing shirtless in Belgrade.

“Don’t @ me for anything I’ve done that has been ‘irresponsible’ or classified as ‘stupidity’ – this takes the cake.”