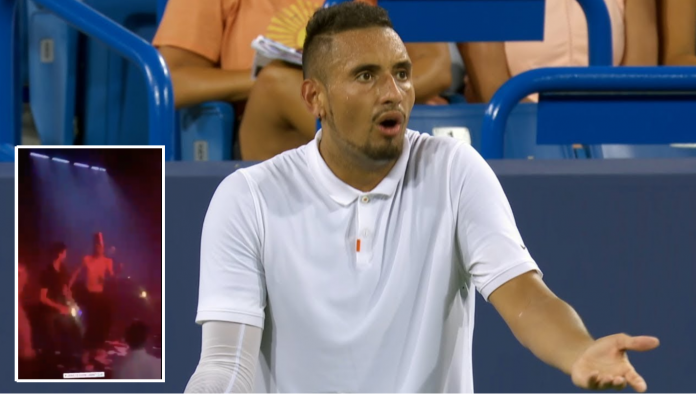 Nick Kyrgios has once again reacted to the the continuation of tennis during COVID-19, this time expressing outrage towards World No. 1 Novak Djokovic for testing positive after holding a charity tennis tournament.

Djokovic has been criticised for organising the tournament and bringing in players from other countries amid the coronavirus pandemic, issuing an apology to those affected on Tuesday.

Kyrgios had already said going ahead with the tournament was a “boneheaded decision” in a tweet on Monday.

Nick Kyrgios proceeded to release footage on Twitter of Djokovic dancing in a nightclub with other tournament players.

“Prayers up to all the players that have contracted Covid- 19,” Kyrgios said, retweeting a video of the players dancing shirtless in Belgrade.

“Don’t @ me for anything I’ve done that has been ‘irresponsible’ or classified as ‘stupidity’ – this takes the cake.”

Djokovic now admits he was wrong to organise the Adria Tour events. In a tweeted statement, Djokovic said he and his wife are currently asymptomatic and will self-isolate.

“I am so deeply sorry our tournament has caused harm,” he said.

“Everything the organisers and I did the past month, we did with a pure heart and sincere intentions.

“We believed the tournament met all health protocols and the health of our region seemed in good conditions to finally unite people for philanthropic reasons.

“We were wrong and it was too soon. I can’t express enough how sorry I am for this and every case of infection.”

Nick Kyrgios expressed similar disappointment exactly one week ago upon the reveal that the US Open is to go ahead with no spectators.

Labelling the decision as ‘selfish’, the Greek-Australian expressed that it wasn’t fair that Australian players will be forced to undergo a two-week quarantine period.

Nick Kyrgios also recently expressed his doubts over sport carrying on as a whole, responding to the new Ultimate Tennis Showdown tournament.

“I’m just not on board with new tennis events and sport going on in general with everything that’s going on at the moment,” Kyrgios said in a public reply to the UTS Showdown Twitter.