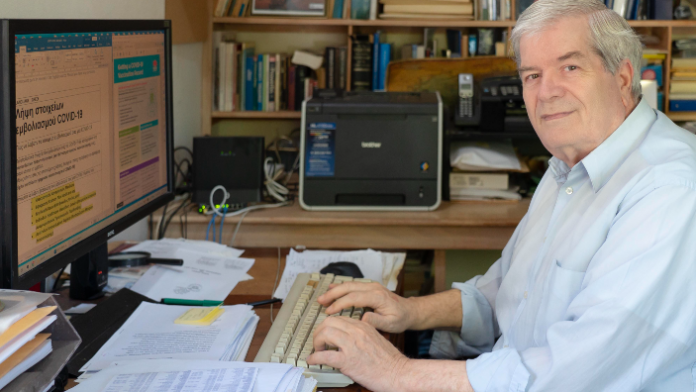 As a former Editor of The Greek Herald, Constantinos Potiris estimates he has translated thousands of newspaper articles to “accurately” represent a story to Greek readers.

It’s this experience which now sees him working tirelessly during the current lockdown in New South Wales to translate COVID-19 public health messaging from English to Greek for the local Greek community.

Mr Potiris is one of more than 800 translators and interpreters working with Multicultural NSW on a casual basis and he says the service they offer is essential “to cope with the changing developments in the fight against COVID-19.”

“Today, after more than half a century, the Greek community in Australia has diversified considerably, but there still remains a significant number of Greek Australians who speak Greek at home and translated information remains a key source of communication for them,” Mr Potiris tells The Greek Herald exclusively.

“The amazing work structure achieved by Multicultural NSW allows the unique multicultural society of the state… to enjoy translation and interpreting services by over 200 ethnic communities of various backgrounds.

“Apart from having a platform to translate their documents in a professional and safe manner, non-English speaking communities have the opportunity to be updated in their mother language on government advice, which became a life-saving necessity in the last two years of the COVID-19 pandemic.”

The NSW Minister for Multiculturalism, Natalie Ward, couldn’t agree more with Mr Potiris and says that, since the start of the pandemic, more than 2,600 resources covering specific health information, including stay at home orders, have been translated in almost 60 languages.

“It is a priority of the NSW Government to ensure our critical COVID health messages reach all corners of our wonderful diverse community,” Minister Ward said in a statement to The Greek Herald.

“I’m so grateful to all our fantastic Multicultural NSW translators, like Mr Potiris, who are working tirelessly behind the scenes to help keep us safe.”

What makes a good translation?

This high praise is well-deserved for a man like Mr Potiris.

A Greek migrant who finally settled in Australia in 1984, Mr Potiris had already attained a Certificate of Proficiency in English from Michigan University when he first started translating for The Greek Herald.

Later he applied to the National Accreditation Authority for Translators and Interpreters (NAATI) and after he passed the demanding examinations, he was accredited as a professional translator (Level 3) for Greek to English and vice versa.

“In translation, your aim is to render the meaning of the source language to the target language, accurately and without omitting any words,” Mr Potiris explains.

“Not all words have a literal translation. Very often word-to-word translation produces a non-colloquial text in the target language. This is now the problem with mechanical translations offered online.

“A good translation must render the correct meaning, as well as the style of the source language text.”

In saying this, it seems the job of a translator such as Mr Potiris is not only always evolving, but also continues to contribute greatly to Australian society.

“Decades ago, the Greek community in Australia with thousands of newly arrived immigrants who did not know English, had no idea of local customs and traditions, could not understand the environment they found themselves in coming from their village (most of them), but could find, read the basics and get information from translations provided to them through various media. A huge contribution!” Mr Potiris says.

“Αt the risk of self-praise, I would like to point out that the significant service provided by translators and interpreters, is not just a means of livelihood. Much more it represents a social function within the unique multicultural social fabric of the Australian society.”