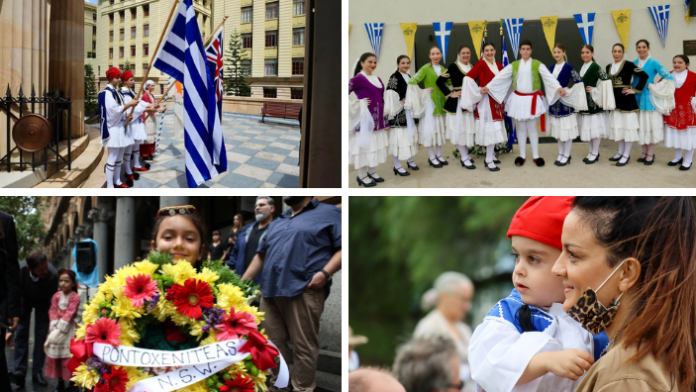 Greek communities across Australia celebrated the 201st anniversary of the Greek Revolution this year with a number of exciting events, wreath laying and flag raising ceremonies.

Here’s our list of how Greek Independence Day celebrations went across Australia:

It was a jam-packed weekend of Greek Independence Day celebrations in Sydney as a number of Greek communities and organisations held events to mark the momentous occasion.

First up was a commemoration event organised by AHEPA NSW in cooperation with Bayside Council on Thursday, March 24. The event started with a flag raising ceremony in the forecourt of Bayside Council conducted by Steve Kamper MP, AHEPA NSW Inc President, Bill Skandalakis, Press Counsellor at the Consulate General of Greece in Sydney, Costas Giannakodimos, and accompanied by Georges River Mayor Nick Katris and Councillor Sam Stratikopoulos, among many others.

This was followed by a celebration at AHEPA NSW Hall in Rockdale, which featured the singing of the Greek and Australian National Anthems, a recital of the Ode in Greek and English, speeches by Mr Kamper and Bayside Councillor Ed McDougall, as well as poem recitals and presentations by students from Kingsgrove Public School. The event closed with young dancers of the Hellenic Lyceum of Sydney.

The next day, on Friday, March 25, the Canterbury-Bankstown Council held an ‘Independence Day Celebration,’ which featured the singing of the National Anthems of Greece and Australia, speeches and poem recitals.

The event was attended by a number of local politicians, such as Sophie Cotsis MP, representatives of Greek organisations, and students from the Greek Orthodox Community of NSW’s (GOCNSW) Clemton Park Greek School and Earlwood Public School.

Later that same day, GOCNSW also held a Cocktail Party to mark Greek Independence Day. The event featured poem recitals and a number of speeches from the President of GOCNSW, Harry Danalis, and the NSW Minister for Multiculturalism, Mark Coure MP, among many others. The celebrations concluded with a dance performance by the Community’s dance group under the direction of Paroula Thurban.

READ MORE: ‘March 25th is about the uprising of the people’: GOCNSW marks Greek Independence Day.

The commemoration included a flag raising ceremony, followed by a memorial service, hymns, poem recitals, the singing of the Greek and Australian National Anthems and a wreath laying ceremony. There were also a number of speeches from Mayor Faker, Father George and Chris Christogeorge. The event concluded with a special performance from the Nassibian Dancers.

Last, but not least, was the traditional wreath laying ceremony at the Martin Place cenotaph on Sunday, March 27. The event included a memorial service conducted by His Eminence Archbishop Makarios of Australia, followed by wreath laying from politicians and representatives of Greek community organisations.

Later that same day was the official opening of the St Basil’s NSW/ACT ‘1821 Greek Art Exhibition’ in collaboration with the Athens War Museum at Sydney Town Hall. The free exhibition features rare objects inspired by the Greek Revolution of 1821, as well as the ‘Heroes Made of Metal’ collection of traditional Greek costumes by internationally renowned sculptor Nikos Floros.

On Sunday, March 27, Grand Lodge of NSW and District Lodge of NSW also held a dinner to commemorate Greek Independence Day. In attendance were a number of officials including George Lizidis, representing the Consul General of Greece in Sydney, and George Lianos, the President of National Council AHEPA Australasia, among many others.

The event featured a number of songs and dances by Sofia Ventouri and the Aristotle Dance Academy, under the direction of Dimitris Papapetrou. The National Anthems of Greece and Australia were also performed, and a number of youth recited poems.

In Victoria, celebrations began with the Greek Consulate General of Greece in Melbourne holding a commemoration event at the Hellenic Museum on March 23. The event was attended by a number of politicians including the Victorian Premier Daniel Andrews who announced the coming of the Evzones to Melbourne from April 21-29 for Anzac Day.

On Friday, March 25, the inaugural Grecian Ball was also held. It was organised by the Greek Community of Melbourne (GCM), the Greek National Day Council of Victoria and the Greek Orthodox Archdiocese of Australia.

READ MORE: ‘It’s a shared journey’: Grecian Ball was all about unity.

Throughout the week, there were also a number of wreath laying ceremonies across Melbourne. On Sunday, March 20, the Organising Committee for the Celebration of the National Anniversary organised a commemoration at Melbourne’s Shrine of Remembrance, whilst Melbourne’s Hellenic RSL laid wreaths at the Australian Hellenic Memorial on Friday, March 25.

There were a large number of attendees including, but not limited to, the Archdiocesan Vicar of the Northcote District, Father Evmenios Vasilopoulos; Maria Vamvakinou MP; Kat Theophanous MP; the Consul General of Greece in Melbourne, Emmanuel Kakavelakis; the President of the Organising Committee for the Celebration of the National Anniversary, Tony Tsourdalakis; and the President of the Greek Orthodox Community of Melbourne, Bill Papastergiadis.

In South Australia, the Greek Orthodox Archdiocese of Australia (Archdiocesan District of Adelaide) held a number of events to mark Greek Independence Day on Sunday, March 27.

In the morning, there was a Divine Liturgy in the Church of Saint Spyridon, Unley, presided over by His Grace Bishop Silouan of Sinope. Later, there was a memorial service at the War Memorial in North Terrace.

Wreaths were laid by the Honourable Consul General of Greece in Adelaide, George Psiachas, as well as SA’s civil and military authorities and representatives of Greek Community organisations.

A parade by the students from the Greek Colleges, Afternoon and Saturday Greek schools of the Archdiocese then took place from the War Memorial to the Torrens Parade Ground.

The Greek Orthodox Community of South Australia Inc. (GOCSA) also commemorated Greek Independence Day on Sunday, March 27. The event was held at the Cathedral of Archangels Michael and Gabriel in Adelaide and involved wreath laying, as well as a number of school presentations.

Later that afternoon, GOCSA in collaboration with the Pan-Rhodian Association of South Australia, held a special presentation with Dr Alfred Vincent, the first lecturer in Modern Greek Studies at the University of Sydney and a long-time collaborator and supporter of the Greek festivals.

A Doxology to honour the fallen heroes of the Greek Revolution was held at the St Constantine and Helen Greek Orthodox Church in Perth on Sunday, March 27. The service was conducted by His Grace Bishop Elpidios of Kyanea.

The Consulate of Greece in Perth then organised a wreath laying ceremony at Kings Park State War Memorial.

The ceremony opened with a religious blessing, followed by presentations from the students of St Andrew’s Grammar, the Centre For Hellenic Studies of Western Australia and the Greek Language and Culture Institute.

Australian and Greek dignitaries laid wreaths and the ceremony was concluded with speeches by the Consul of Greece in Perth, Ms Georgia Karasiotou; the Governor of WA, the Honourable Kim Beazley AC; representing the WA Premier, Simon Millman MLA; and representing the WA Opposition Leader, Tjorn Sibma MLC.

The Consulate of Greece in Perth then offered light refreshments at the park to attendees.

The Greek Orthodox Community and Church of Canberra (GOCCC) went all out this year to mark Greek Independence Day. Forty Greek flags are flying proudly across Vernon Circle, Kings Avenue and Commonwealth Avenue until Monday, April 4.

A number of buildings also shone blue and white on March 25. These were the National Museum of Australia, the Hellenic Club of Canberra, the Greek Embassy in Australia, Canberra Centre Fountain, John Gorton Building, Telstra Tower and Old Parliament House, among many others.

The Canberra Hellenic Dancers performed in front of the National Carillon as it was officially lit.

On Sunday, March 27, there was also a special Doxology service held at St Nicholas Greek Orthodox Church in Canberra in honour of the fallen heroes of the Greek Revolution. The service was presided over by His Grace Bishop Bartholomew of Charioupolis and parish priest, Father Petros Kipouros.

This was followed by a memorial service and wreath laying ceremony at the Australian Hellenic War Memorial. In attendance were a number of officials, army representatives and Greek community organisations, including the President of the GOCCC, John Loukadellis.

His Grace Bishop Silouan of Sinope was in attendance for the events and paid a visit to the Greek Orthodox School of Darwin in Nightcliff, where young students performed poems and songs in honour of the heroes and heroines of the Greek Revolution.

The Greek Community of Tasmania held a Doxology service and wreath laying ceremony on Sunday, March 27 at St Georges Greek Orthodox Church in Hobart. Wreaths were laid by Nick Theodoropoulos, the President of the Community, John Gavalas from the Lipsis Brotherhood, and Nick Gonianakis from the Cretan Brotherhood.

Students from Hobart’s local Greek school recited poems and the National Anthems of Greece and Australia were sung.

Parish priest, Father Nicolaos Bozikis, read a prepared speech about the importance of Greek Independence Day, which was kindly provided by Rosa Roussos who has been a Greek school teacher for over 35 years in Hobart.

The Greek Orthodox Community of St George in Brisbane held a Doxology service and wreath laying ceremony on Sunday, March 27.

In attendance were the Queensland Governor, Dr Jeannette Young PSM; the Honorary Consul of Greece in Queensland, James Raptis OBE; and members of local Greek communities.