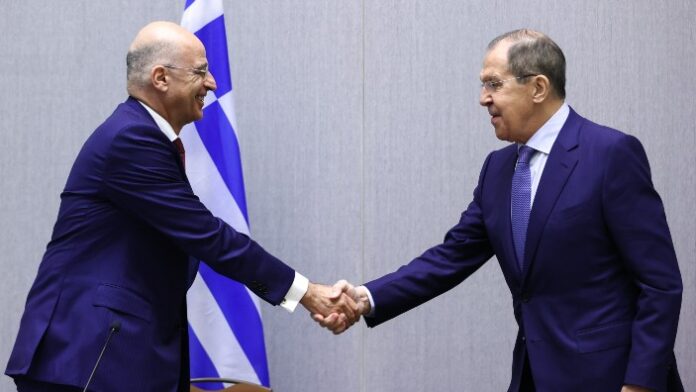 Greek Foreign Minister, Nikos Dendias, discussed relations between Greece and Russia and Greece’s role in EU-Russia relations in a meeting with his Russian counterpart, Sergey Lavrov, in Sochi on Monday.

In a joint press conference, Dendias shared his optimism that Prime Minister, Kyriakos Mitsotakis, will be able to visit Russia in 2021, and highlighted Greece’s consistent position on normalising relations between Russia and the European Union.

“It is the desire of the Greek government to restore relations between the Union and Russia to what it was in the past, and not to deteriorate further,” Dendias said.

“We believe Russia is an integral part of the security structure of Europe and has an important role to play in countering regional and international challenges.”

He also noted the importance of maintaining open communication between Russia and the EU, in an effort to “return to an atmosphere of mutual respect, normalisation, and following that at a later time, a strengthening of EU-Russian ties.” Dendias said that this is the message Mitsotakis will bring to his EU counterparts.

“We have been ready for a week to welcome Russians who desire to visit Greece and have been vaccinated or are in possession of a negative test. I have asked the Russian side to restart flights between the two countries. I am repeating this publicly and I asked the minister himself,” he said.

On his side, Lavrov discussed the long bonds that connect Greece and Russia, going as far back as 1827 and Russian intervention in the Greek War of Independence.

Lavrov stated that cooperation between the two countries continues to gradually improve, particularly with the contribution of constructive political dialogue at the highest level.

“Today we examined the progress of applying the deals achieved by the President of the Russian Federation Vladimir Putin and the Greek Prime Minister Kyriakos Mitsotakis, as well as the decisions discussed during the meeting of the Prime Minister of the Russian Federation Mikhail Mishustin on March 24 and their telephone conversation on May 5,” he said.