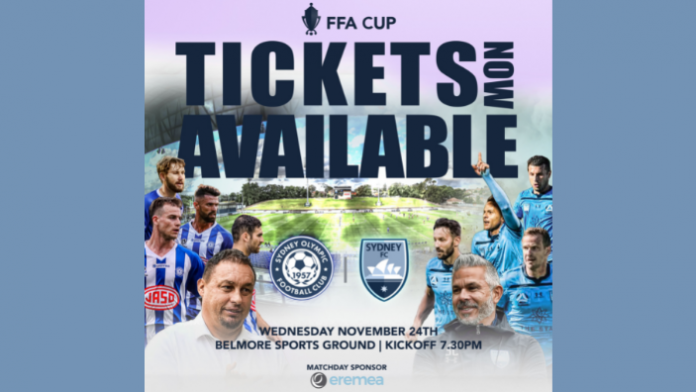 Tickets have been released for the highly anticipated FFA Cup clash between Sydney Olympic FC and Sydney FC on November 24.

“This will be a huge night for our Club, we know we have the most passionate and the best supporters in Australia and they have a proven track record of turning up in the masses for big games,” Sydney Olympic CEO, John Boulous, said.

The club recently signed former A-League striker Roy O’Donovan for the FFA clash and 2022 season NSW NPL season. Olympic will be striving to reach the FFA Cup Round of 16 for the first time since 2015.

The CEO added that he sees it as a great opportunity for the Sydney Olympic family to come together once again at the famous Belmore Sports Ground.

“There will be something for everyone including traditional pre-match entertainment, as well as a food fair including something for the kids, desserts and, of course, an authentic souvla to look after your dinner needs,” Boulous said.

“Olympic fans, we need your support like never before! Get your tickets now and don’t miss your chance to join in on the OLYMPIC chant and fill Belmore Sports Ground”.