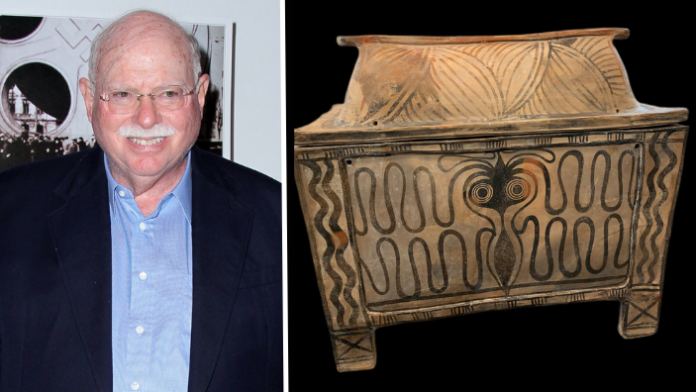 Billionaire US hedge fund manager Michael Steinhardt has agreed to return over $99 million worth of stolen antiquities.

In return, he will dodge criminal charges for acquiring pieces that were smuggled out of 11 countries including Greece.

In addition, he will be banned from buying any more for the rest of his life.

“For decades, Michael Steinhardt displayed a rapacious appetite for plundered artefacts without concern for the legality of his actions, the legitimacy of the pieces he bought and sold, or the grievous cultural damage he wrought across the globe,” District Attorney Cyrus Vance Jr said in a news release.

“His pursuit of ‘new’ additions to showcase and sell knew no geographic or moral boundaries, as reflected in the sprawling underworld of antiquities traffickers, crime bosses, money launderers and tomb raiders he relied upon to expand his collection.”

Mr Steinhardt said in a prepared statement issued by his attorneys that he was “pleased that the District Attorney’s years-long investigation has concluded without any charges and that items wrongfully taken by others will be returned to their native countries.”

138 of the 180 stolen antiquities were Greece, Israel, or Italy, according to a statement of facts.

Many of which were removed from their countries of origin during times of war or civil unrest, prosecutors said.

The Greek chest, dating from around 1,300 BC in Crete, was a larnax designed for holding human remains.

Prosecutors said it was purchased from a known antiquities trafficker.

The antiquities will be returned to their rightful owners, according to Mr Vance.