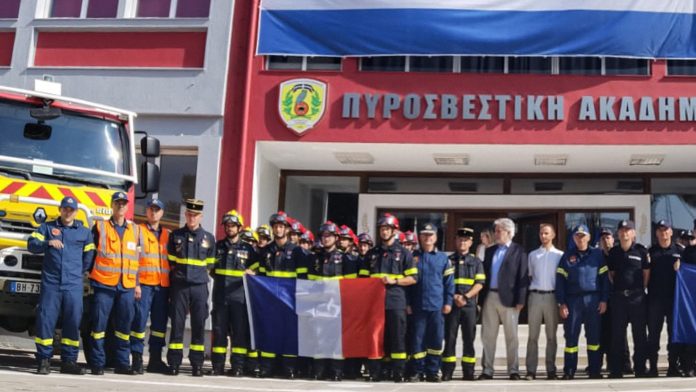 Firefighters from France and Norway have arrived in Greece to help the Greek Fire Service combat the wildfires ravaging the country.

The French contingent consists of 25 firefighters that will remain in Attica until the end of August.

The Norwegian unit, who arrived on Sunday, consists of 27 firefighters. They will be stationed in the central Peloponnesian city of Tripoli alongside a Finnish team of 48 firefighters expected to arrive later today.

This comes as the Greek Fire Service reports that 49 fires are currently burning across Greece.

In a ceremony held at the Fire Service Academy, welcoming the French unit and farewelling the 29 firefighters from Romania, Greece’s Climate Crisis and Civil Protection Minister, Christos Stylianides, remarked: “It is a special day for us Greeks.”

Together we are stronger. Together we face #climatecrisis – This is #EUsolidarity! This is Europe! pic.twitter.com/fneKFm4oG2

“We are in a difficult period, where in France you are also facing many forest fires. Your presence, dear friends, proves once again how strong the ties are between the Greek Fire Service and the corresponding French one,” he said.

“At the same time, it confirms the strong historical ties between our two countries, Greece and France.”

In a tweet following the event, the Minister added “Your presence is practical proof of fraternal ties.”

The arrival of more than 200 firefighters from Bulgaria, France, Germany, Romania, Norway and Finland between July and August has occurred in the context of the pre-positioning pilot project implemented through the European Union Civil Protection Mechanism.

The new teams are replacing the 28 Romanians who left the country on July 29.