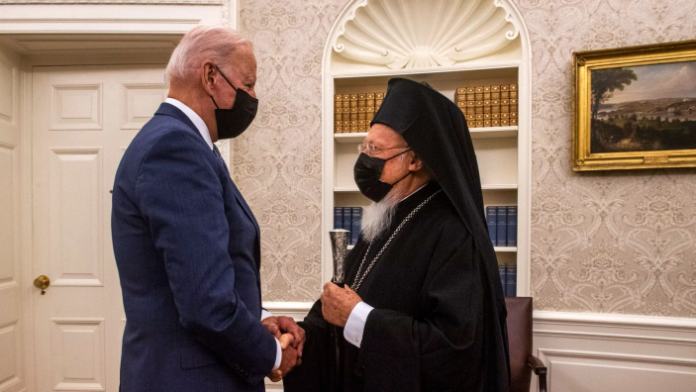 Ecumenical Patriarch Bartholomew, the spiritual leader of Eastern Orthodox Christians, was released from a Washington hospital on Monday morning after an overnight stay early in his 12-day visit to the United States.

Bartholomew was brought to George Washington University Hospital on Sunday night after he felt “unwell” due to the long flight and busy schedule of events.

But upon his release, Bartholomew didn’t waste any time getting back to work. On Monday night, he held a meeting with US President Joe Biden in the Oval Office.

“…the Ecumenical Patriarch addressed the urgency of political leaders responding to the climate crisis, the distribution of Covid vaccines to developing nations, and the reopening of Halki Seminary,” Archbishop of America Elpidophoros said about the meeting in a tweet.

This meeting followed an earlier discussion between the Ecumenical Patriarch and the US Secretary of State, Anthony Blinken, at the office of the US State Department.

During this meeting, Bartholomew raised concerns about the plight of Christians in the Middle East, addressed the urgent need for political action in response to climate crisis & emphasised the role of inter-religious dialogue.

Later on Monday, Bartholomew is set to attend a dinner at Georgetown University hosted by its president, John DeGioia, and Cardinal Wilton Gregory, the Roman Catholic Archbishop of Washington DC.

On Thursday, he is scheduled receive an honorary degree from the University of Notre Dame in an event highlighting efforts to improve Orthodox-Catholic ties.

On November 2, he is scheduled to preside at a door-opening ceremony at St Nicholas Greek Orthodox Church and National Shrine in New York City. The shrine replaces a church destroyed during the September 11, 2001, terrorist attacks on the World Trade Center.