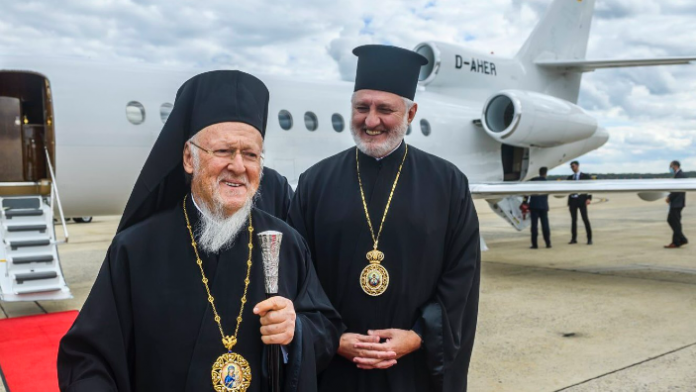 Ecumenical Patriarch Bartholomew has been hospitalised for “medical observation” in Washington D.C. after feeling unwell.

Bartholomew felt unwell shortly before leaving for the service at St Sophia Cathedral on Sunday, due to the long flight and the busy schedule of events that followed immediately after his arrival in the United States, Greece’s state agency AMNA reports.

His doctor advised him to rest and for precautionary reasons he was taken to George Washington University Hospital. In an update on Twitter, the Patriarch’s media team writes that he is “feeling well” and “will spend the night in hospital for monitoring.”

The Ecumenical Patriarch arrived in Washington on Saturday night to a warm reception by members of the Greek American community and church members. It is his first visit since 2009. His plane landed at Andrews Air Force Base.

Accompanied by Archbishop Elpidophoros of America, Patriarch Bartholomew arrived outside his hotel in central Washington DC to find priests and students from the community of the Greek Orthodox Church of St George in Bethesda, MD waiting for his arrival. After a blessing by the Patriarch, the two prelates addressed the crowd.

“We, the faithful children of the Mother Church of Constantinople, welcome you with open hearts for the seventh time,” said Elpidophoros, before adding that “we await for you to show us the way and provide us a new and inspired vision of the faith of the holy and the Apostles that you know so well.”

The Patriarch expressed his gratitude and emotion over his return to the United States and stressed the strong bonds connecting the Ecumenical Patriarchate of Constantinople and the Greek Orthodox Archdiocese of America.

As part of his visit to the United States, Patriarch Bartholomew has scheduled meetings with President Joe Biden, Secretary State Antony Blinken and Speaker of the House Nancy Pelosi.