On This Day: Dimitris Mytaras, Greek painter, was born 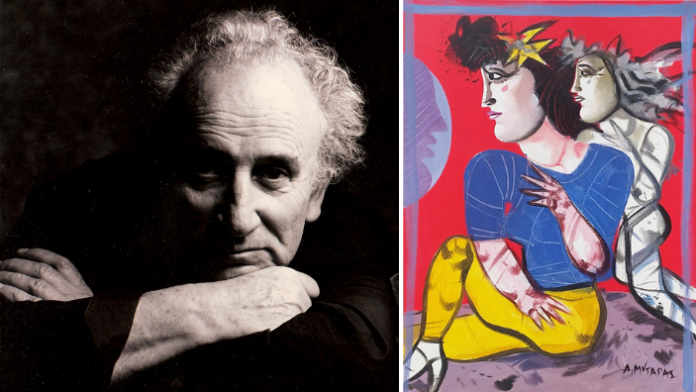 When Dimitris Mytaras passed away, Greece lost one of its best artists of the 20th century. At least, that’s what Greek Prime Minister Kyriakos Mitsotakis had to say at the time of his passing in February 2017.

Dimitris Mytaras was a painter best known for his expressionist depictions of still life and figures, including his artworks ‘Glory’ and ‘Femme’. The Greek Herald takes a look at the life of this formidable artist.

Dimitris Mytaras (Δημήτρης Μυταράς) was born on 18 June, 1934, roughly 80 kilometres from the Greek capital in Chalkida.

Dimitris grew up in the 1940s when the current art scene was dominated by Theodoros Stamos, Dimitris Koukos, Panayiotis Vassilakis, and Jannis Kounellis. The turn of the 19th century marked a departure from the Renaissance era that dominated the Greek art scene and impressionist artists were the driving force in the first half of the 20th century in modern Greece.

Mytaras began refining his craft between 1953 and 1957 at the Athens School of Fine Arts, (ASFA) and later at the École nationale supérieure des Arts Décoratifs (ENSAD) during the 1960s in Paris, to join the ranks of some of Greece’s most elite artists.

Little did Mytaras know at the time that he would join his tutors Yiannis Moralis and Spyros Papaloukas in the ranks of ASFA forty years later as a professor and rector.

His debut was finally marked by his first solo exhibition at Athens’ Zygos gallery in 1961.

Mytaras’ popularity grew and he started to become associated with European critical realism, which is marked by a political narrative and limited palette, during the period of the Greek military junta in the late 1960s until 1974.

By the end of military rule, Mytaras shifted to incorporate expressionistic elements and vivid colours in his anthropocentric works.

Mytaras organised several retrospective exhibitions between the late 1980s and 2006.

His commissioned poster is ingrained in people’s memory of the 2004 Athens Olympic Games.

He became a member of the Athens Academy in 2008 and was awarded the Commander of the Order of the Phoenix medal.

That same year, he was awarded the gold medal of the city by the Municipality of Chalkida.

His eyesight was impaired by 90 percent by the time of his death, an unfortunate irony for a visual artist like Mytaras.

2017 was a big blow to Greece’s art scene, with the passing of Jannis Kounellis and Mytaras.

“With his stance in life and his creations, Dimitris Mytaras honoured our country in a way that few people have,” the Greek Prime Minister Kyriakos Mitsotakis said in 2017.

“If you remove Myraras from the Greek history of art, then you know it will be poorer,” the Director of the Greek National Gallery Marina Lambraki-Plaka once said.

So it has been, but his art lives on in the Dafni Athens Metro Station and museums around the world, including the Museum of Contemporary Art in Macedonia.