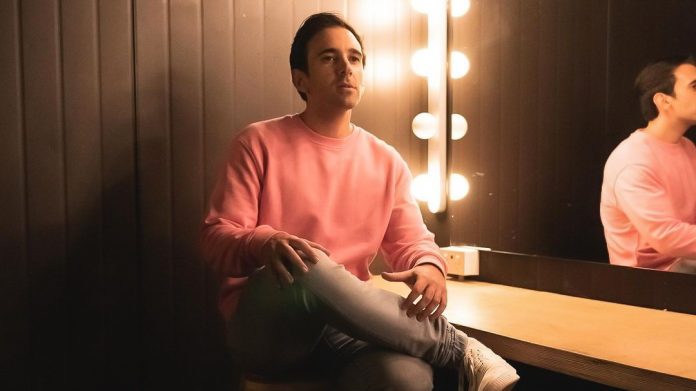 By Chris Spyrou and Anastasia Fokianos.

As the house lights dimmed and a projector beamed onto the stage at Sydney’s Comedy Store on Friday, June 17, audiences were taken back to the late 90s, being welcomed into the Locascio home.

In full focus was a home video displaying a young Anthony Locascio wearing a blue skivvy and the era’s staple piece: denim overalls.

Interacting with a man in Italian, Locascio makes it known from the outset that his comedy instalment Don’t Call me A Wog! is a coming-of-age story that navigates his 29-year, on-again, off-again relationship with his Greek and Italian background.

As the video ended, the audience was met by a now fully grown Locascio in the flesh who had swapped out his overalls for a pink crewneck and found himself surrounded by a series of metaphorically significant coloured boxes.

Incorporating audio-visual, music and lighting into an hour-long show, Locascio became the director and narrator of his intelligently vulnerable stage show.

Describing life as a 97-kilogram 16-year-old, the rising comedian detailed how he dealt with bullying amidst comprehending his parents’ divorce.

From sporadic and nervous renditions of George Michael’s Careless Whisper to describing his horror when offered a tuna casserole by a non-ethnic, the comic transforms the show into a cultural production about coming to terms with his ethnic identity in Australia.

Infusing sharp wit and self-deprecating humour, Locascio was unafraid to poke fun at his early adult and patriotic mission to rise through the ranks of ‘wogness’.

“When you’re deep-frying halloumi while watching a Panathinaikos game on a bootleg satellite box at three in the morning, that’s when you’ve reached peak Greek,” he said.

However, his mission to become the ‘King of the Wogs’ at university saw his studies pushed to the side and in his third year, he was removed from his Law Degree for plagiarism.

Whilst Locascio was adamant he and his best friend submitted the same assignment due to their “telepathic connection,” his expulsion quickly turned his intense pride for his heritage into shame.

It also marked the onset of his conflicting relationship with his dual heritage, where Locascio finds comfort in describing Greek and Italian uni students as ‘YD mannequins,’ whilst maintaining that stereotyping in comedy and in life is dumb.

Trying to make sense of this contradiction would only serve to further confuse, so allow us to wrap this review with this:

Anthony Locascio is a comedian who is of Greek and Italian heritage. Whilst asserting he is not a ‘wog comic’, Don’t Call Me A Wog! is a production in which people belonging to an ethnic minority will see themselves represented to a tee.

Through his hour-long show, the title becomes something of a contradiction, but in that confusion, he perfectly captures the conflicting feelings one would feel growing up in Australia proud of their ethnic heritage.

Share
Facebook
Email
Twitter
Pinterest
Linkedin
WhatsApp
Viber
Print
Previous article‘We will continue to serve Greek Australian interests’: Delphi Bank to be rebranded under Bendigo Bank
Next articleLetter: ‘The Cyprus Club in NSW is open for all members, the Greek and wider community’