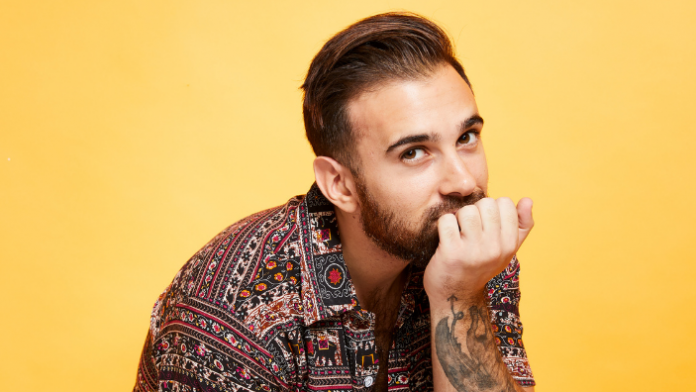 Growing up in Australia, Anthony Locascio found himself confined to a prison of ethnic and cultural stereotypes.

‘Don’t Call Me A Wog!’ (An E̶t̶h̶n̶i̶c̶ Comedy Story) is his story of escape, his convoluted encounters with the Greek and Italian heritage that so greatly affected him, and his conflicting relationship with traditional ‘wog comedy.’

Beginning at Adelaide Fringe Festival in March, Anthony will be performing six shows, before heading back down the Western Highway to complete a run of ten shows at Melbourne International Comedy Festival, appearing April 10th to April 24th.

A show for all Australians, regardless of heritage or background, ‘Don’t Call Me A Wog!’ pushes Anthony’s performances further than ever before, incorporating audio-visual, music and lighting components to create an intelligent, dark and vulnerable cultural production.

“My relationship with my Greek/Italian background has been a 29 year, on again, off again love story. Growing up in a country as ethnically charged as Australia, I have, at various points in my life, felt both immense pride and shame for the cultures of my grandparents,” Anthony said.

“This show is the story of that emotional roller coaster; my relationship with my background throughout my childhood and adolescence has been mirrored by my use of it for comedy material.

“‘Don’t Call Me A Wog!’ is a show for everyone, and a perspective on ethnicity in Australia that hasn’t been heard before, certainly not in a stand-up comedy format. This is also the first time I’m doing an Australian tour, so I hope plenty of people come out to see it!”

Who is Anthony Locascio?

Anthony Locascio is one of Australian comedy’s rising stars. Blending sharp wit with musings on his ethnic background, Anthony has become known for his unique storytelling style.

Anthony forged his path in stand-up by writing an hour show after a year of performing, hiring a theatre and inviting 400 friends and acquaintances to watch.

The show was posted to social media, giving Anthony a loyal fanbase, selling out shows each year since 2017 and boosting Anthony’s Youtube channel to 12,000+ subscribers, and 1,000,000+ views, with hundreds of comments from angry people in Italy and Greece responding to a video in which Anthony calls them lazy.

He appears weekly at Sydney’s best comedy venues, and has performed with some of the best comedians Australia has to offer; including Dave Hughes, Nikki Britton, Tahir, Anthony Salame, Luke Heggie and many more.