Principal at Lucas Gardens School, Jenny Zagas: ‘We put the person before their disability’ 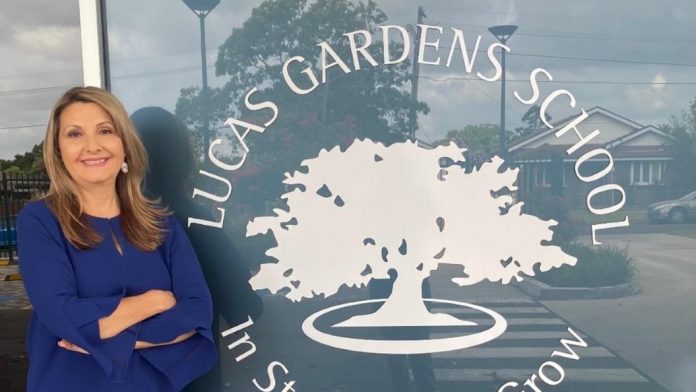 From a very young age, Jenny Zagas, was passionate about helping people. She tells The Greek Herald how she always used to translate for newly arrived Greek migrants such as her uncle, or “helped the old lady at the supermarket who couldn’t be understood.”

“I didn’t have to try. It just came naturally to me,” Ms Zagas says.

So naturally in fact, that Ms Zagas decided to become a teacher in special education. In this role, she provides educational programs for students with high and moderate support needs, including intellectual and physical disabilities, sensory impairments and complex medical conditions.

This is something, Ms Zagas says, that wasn’t always easily understood by those around her.

“In those days you didn’t really talk about disability… the older generation didn’t really know that special schools existed. So I needed to explain to them my philosophy that every child can learn, and every child has the right to an education,” Ms Zagas explains passionately.

Of course, Ms Zagas’ parents were incredibly supportive of her decision to work in special education and because of this support, she was able to complete her primary teaching degree and a special education course.

Ms Zagas then started working at Caroline Chisholm special school for ten years, before moving to Marrickville Public School and later becoming Assistant Principal of the ‘support unit’ at Gardeners Road Public School. But then, after 11 years, Ms Zagas was lucky enough to become the Principal at Lucas Gardens School and she has never looked back.

‘This is not a hospital. It is a school’:

The first task which Ms Zagas took on as Principal of the special education school, was a complete rebuild of the premises in Canada Bay, NSW. The school community was already fundraising for a hydrotherapy pool when Ms Zagas took up the role, but they were short by $250,000.

Cue a supportive Greek community who rallied around Ms Zagas and, with the help of George Zakos and his wife Barbara, organised a dinner dance at La Montage to raise the necessary funds.

“Later, in the 2015 Federal Budget, it was announced that Lucas Gardens School was going to get a rebuild. So that was amazing.”

As Principal, Ms Zagas played a significant role in the rebuild as she was always on site choosing “the finishing touches” and “every piece of furniture.” This, Ms Zagas says, was a privilege as it helped her maintain her ultimate educational goal.

“One of my biggest commitments is to move away from a therapy model… So it is a teaching facility. It is not a hospital. It is not a rehab centre. It is a school,” Ms Zagas states.

“And you know, when people come to Lucas Gardens, the first thing they say is that it looks like the school down the road, like Trinity Grammar. It doesn’t look any different, apart from the wheelchairs you see, because the focus is teaching and learning.

“So it was a privilege to build the next type of special education facilities for kids with disabilities and young people.”

Males in special education and leadership:

In this state-of-the-art facility, Ms Zagas and her team of committed teachers work hard to ensure their special needs students have the best of everything.

In most cases, there are environmental adjustments for some students, such as those who are legally blind. In high school there is also a shift to a “life skills curriculum,” where students can learn to be as independent as possible. Some students who are non-verbal are also assisted with accessing communication devices to help them with their education experience.

“90 percent of the students at Lucas Gardens are non-verbal, so one of the things I’ve really instilled in my school is that every child must leave in Year 12 with a communication device. That could be hand signing, an iPad with pictures… or even eye gaze,” Ms Zagas says.

With such ground-breaking initiatives taking place at Lucas Gardens, we just had to ask Ms Zagas how she manages to pull it off. Her answer? It all comes down to leadership and of course, putting the person before their disability.

“One of the things we do with the high school is hold talks around appropriate language… putting the person before the disability. Not saying, ‘the autistic child,’ but saying ‘the young child with autism.’ So one of the things that we do a lot at Lucas Gardens is disability awareness,” she says.

“I [also] have to make some strong decisions about the school, but you have to lead by heart and show that empathy and connection to the students and the families.”

Is this a role which can only be done by females in special education? Ms Zagas believes that’s not the case and says she hopes to see a positive shift in the female to male ratio in special schools.

“One of my jobs as a Principal is to look at the next generation and really encourage our aspiring leaders, both male and female… to take the next step.”

With such clear passion for special schools, there’s no doubt that the future of this unique educational field is in good hands with Ms Zagas.