Italy returns Parthenon fragment to Athens in nudge to UK 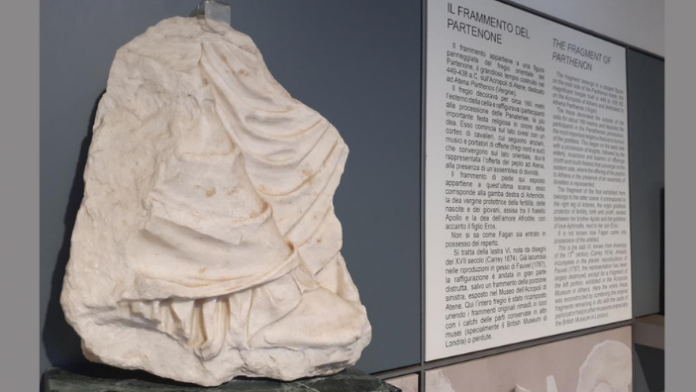 An Italian museum is lending a fragment of the Parthenon Marbles to Greece, in what both sides hope will become a permanent return that might encourage the British Museum to send their own pieces of the works back too.

Sicily’s A. Salinas Archaeological Museum has signed an agreement with the Acropolis Museum in Athens for a once-renewable, four-year loan of a fragment it has from stone VI on the eastern frieze of the Parthenon.

The fragment will be exchanged for a loan of a marble statue of Athena and a protogeometric vase.

READ MORE: Fragments of the Parthenon Marbles reunited in the Acropolis Museum.

“The return to Athens of this important artefact of the Parthenon goes in the direction of building a Europe of culture that has its roots in our history and in our identity,” Sicily’s councillor for cultural heritage and identity, Alberto Samonà, said.

In a statement, the museum said the ultimate aim was the “indefinite return” of the fragment to Athens.

READ MORE: ‘Paving the way’: Italy to return a piece of the Parthenon frieze to Greece.

Italy’s fragment has been loaned to Athens in the past, but for short periods of time. Sicily’s regional authorities have initiated talks with the Greek Culture Ministry to make the loan permanent, putting it on the agenda of a ministry committee that handles such returns, the statement said.

The statement quoted Greek authorities as praising the initiative in the hope that it encourages the British Museum to return its sculptures, which were taken from the Parthenon by Lord Elgin, the British ambassador to the Ottoman Empire, in the early 19th century.

Greek Prime Minister, Kyriakos Mitsotakis, offered a similar loan deal to UK Prime Minister, Boris Johnson, in November last year, as a means to facilitate the return of the Parthenon Marbles from the British Museum. Johnson rejected the demands of his Greek counterpart.