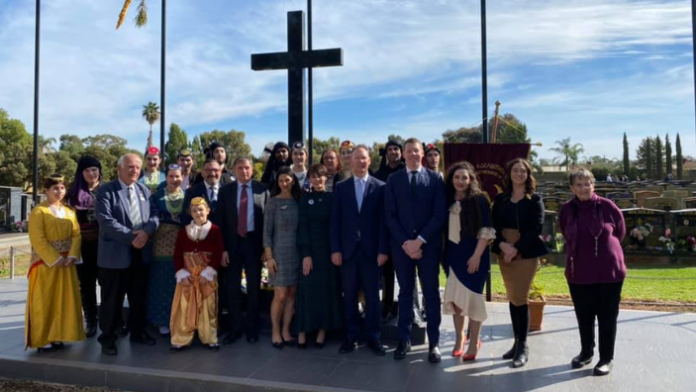 With a Church Service held at the St Dimitrios Orthodox Church, followed by a wreath laying ceremony and the raising of the Pontian, Australian and Armenian flags at the Salisbury Memorial Park, South Australia’s community paused on Sunday, May 23, to commemorate the 102nd anniversary of the genocide of Pontian Hellenism.

Present for the proceedings were members and representatives of the Greek and the wider community as well as special guest and dignitaries, including but not limited to the Consul General of Greece in Adelaide George Psiachas; politicians Steve Georganas, Joe Szakacs and Stephen Mullighan; Mayor of the City of Salisbury Gillian Aldridge; member of SAMEAC Andriana Christopoulos; President of the Armenian Cultural Association of SA Elena Gasparyan and Fr Christos Tsoraklidis.

The multi-event commemoration ceremony continued with speeches and a light meal at the Pontian Brotherhood’s clubrooms in Pennington.

In his speech, Federal Member for Adelaide, Steve Georganas, called the Morrison government to follow the example of US President, Joe Biden and formally recognise the genocide of Armenians, Pontian Greeks and Assyrian Christians in Asia Minor. Georganas also announced that with MPs from other parties he is planning to move a motion on the issue, in the Australian Parliament.

Stephen Mullighan MP, who is married to a Pontian, expressed his pride for the Pontian heritage that runs in the family and extended his support to the Brotherhood.

The president of the Armenian Cultural Association of SA, Elena Gasparyan, said that Armenians and Pontians are the same and assured the audiences that the fight for the recognition of the Genocide is common and needs to continue. Ms Gasparyan also commended SA MPs, Irene Pnevmatikos and Tom Koutsantonis on their leadership regarding the issue.

The Brotherhood’s Chair person, Yanni Papadopoulos, spoke extensively about the history of the Pontian Greek Genocide and said that it’s important for the old generation to pave the way for young people and encourage them to step up and continue the Pontian legacy and culture.

In an emotional speech, the Brotherhood’s President, Nazareth Nalpantidis Chisholm, shared her family’s story and promised that the sacrifices of the Pontian Hellenism will never be forgotten before she went on to thank the Committee and volunteers for their efforts.

The afternoon concluded with a commemorative dance performance from the Pontian Dance Groups.

One day before the Pontian Brotherhood’s events, on Saturday May 22nd, the Pontian Eagles Soccer Club took on Port Adelaide Pirates in their annual Heritage Game.

The Senior Men’s team wore a replica shirt of the ‘Pontos,’ football team made by students at the Anatolia College in Merzifon.

Just before 7pm the Senior team walked onto the pitch accompanied by junior dancers from the Pontian Brotherhood of SA, game officials and Port Adelaide Pirates players where one minute’s silence was observed.

“I was unfortunately unable to make the field. Just before kick-off though, standing there on the pitch and wearing the shirt, during the minute silence and looking around at the large crowd of people, the Pontian dance group, my team mates in the shirt beside me, it made me feel an overwhelming sense of honour for being a Pontian,” club player Lazaros Gialamas told The Greek Herald.

“At the same time, this moment made me realise how important not only commemorating May 19 is, but any event whereby we promote our identity and culture in ensuring our people aren’t forgotten,” he said.

Despite the loss, with two goals in the final 5 minutes of the game, the Eagles left with their heads up for a great game and promised to be back next year.