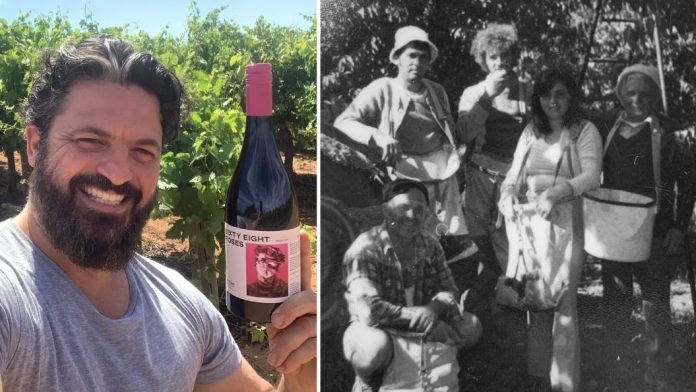 South Australia’s Riverland produces 60 per cent of Australia’s wine, by volume, and many Greek families who migrated to the region from the 1950s to the 1970s have contributed to its recognition as the engine room of the country’s wine industry.

The Koutouzis family is one of them.

“My parents, Theodora and George, immigrated to Australia from the Peloponnese in the 1960s and 70s and they moved to the Riverland to work in factories and pick fruit,” John Koutouzis, the heart and soul of the family’s handcrafted boutique wine brand, Sixty Eight Roses, tells The Greek Herald.

From the mid 1900s many Greek arrivals in South Australia were employed on two-year contracts with the Australian government.

They worked in ship building in Whyalla, fishing in Port Lincoln and as fruit pickers and growers in the citrus, stone and dried fruit industries of Renmark and Berri. Others migrated to Port Pirie and joined the substantial Greek community already there.

“My parents met each other in the factories in Berri in the early 1970s. They got married, had their first child and together they opened a Greek Deli. Shortly after, they sold the Deli and in the mid 70s, they bought the family farm at Chilton Road in Berri,” John said.

“We [John and his three siblings] grew up in a 20-acre farm full of different varieties of wine grapes, table grapes, dried apricots and peaches. It was a beautiful country lifestyle away from the big smoke among many other migrants and with an annual multicultural festival.”

The Koutouzis family business was and remains one of the biggest distributors and suppliers for major wineries and winemakers in the area.

Ditching the corporate life for winemaking

In the 2000’s after two significant droughts a global over supply of wine grape and the shortage of water saw the demise of Riverland’s wine industry boom.

It was then that the region’s multicultural community started to lose its vibrancy and colour.

“After a while the community got smaller. The children of the people who migrated to the Riverland went to university and moved to big cities.”

In 2016 there were only 1,278 people of Greek descent living in the Murraylands and Riverland region.

John Koutouzis finished high school and then went to University of South Australia where he completed a commercial law degree.

“Then I went to the banking sector and corporate life in Adelaide and then to Melbourne for four years. But this lifestyle didn’t satisfy me at all,” he said.

“From a country boy, living in a farm to wearing a suit and being restricted to a 9-5 job wasn’t for me. So, in 2010 I left Melbourne and came back to the Riverland where I started working on the farms again.”

I asked John if he ever looked back.

“It is the best decision I’ve made. On the farm I can be myself, work my own hours and have that freedom, fresh air and space.”

The Riverland has been for some years now redefining itself as an inland cluster of viable, smart vineyards and wineries and has proven that resilience and perseverance is a key to success.

So has John, who left behind a busy lifestyle to go back to his roots and pursue his passion for organic, handmade wine.

“Growing up on the vineyard we grew a lot of red varieties, especially shiraz and grenache and we’d make wine every year. When I came back from Melbourne, I thought to make a ton. It became popular, I made some more and now I’m slowly branching to more varieties,” he said.

And this is how his brand, Sixty Eight Roses came about.

“We launched our product in February 2020 and in March the pandemic happened. We had to focus on domestic South Australian sales and branch our product locally because the big states were in lockdown. It was super stressful but this experience taught me how to be resourceful and resilient.”

South Australia has a new generation of winemakers who want to breathe new life into one of Australia’s oldest wine regions and John Koutouzis’ brand is certainly one to look out for.

“As a nano-producer I make roughly 2-3 tonnes per variety and I want to keep it quality high. I want it to be personal, handmade and something unique,” he said.

I asked him how he came up with the name of the brand.

“Sixty-eight is our farm allotment number,” he said.

“Our family home where we were born, grew up and lived is surrounded by so many varieties of roses that grow on our front yard. This is where I come home after a hard day’s work and I can switch off, I can relax and come up with ideas.”

For John and all the Greek Australian winemakers and producers who keep the family traditions going and create small brands with big impact I think we should raise a glass.