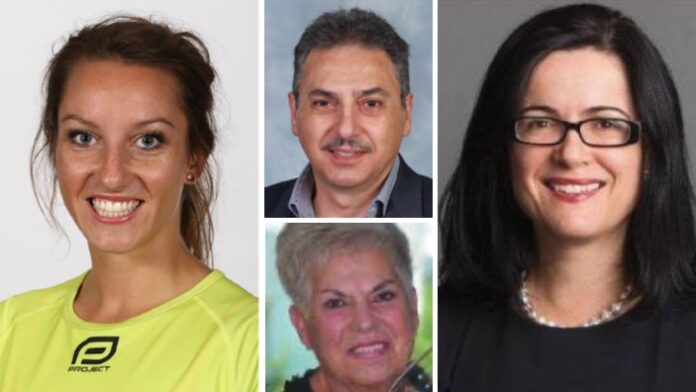 At least six Greek Australians were recognised on the Australia Day Honours List this year, in a mark of respect for their service to the Australian way of life and community.

Following the announcement this morning, The Greek Herald had the privilege of speaking to some of these proud Greek Australians to get their thoughts on how it feels to be recognised. This is what they had to say.

*Please Note: The below recipients are those The Greek Herald could identify by their Greek name.

Ms Ahilas was recognised for service to people affected by asbestos-related diseases and to the law. She has been a Principal Lawyer and Director at Maurice Blackburn Lawyers in Sydney since 2004. She is also currently the National Head of Asbestos and Occupational Diseases at the firm.

In the field of law, Ms Ahilas is currently an accredited mediator; she was a partner at Turner Freeman Lawyers from 1990 to 2004, and a member of the Law Society of New South Wales (since 1989), the Women’s Lawyer’s Association, Thoracic Society of Australia and New Zealand, The Baird Institute of New South Wales, and Cancer Council New South Wales.

Her work with asbestos-related diseases is tied to her co-authoring, ‘Understanding Mesothelioma,’ with the Cancer Council NSW, as well as organising several fundraising events including the inaugural Bernie Banton Dinner in 2010 and 2011.

Ms Ahilas tells The Greek Herald she feels “a range of emotions at receiving this award.”

“I feel extremely humbled, blessed and honoured to be acknowledged in such a way for a career that I have loved,” Ms Ahilas says.

“I come from a working class non-English speaking background. Greek was my first language. I experienced first hand the difficulty of accessing services to the law and medicine when there is a deficiency in language.

“I have acted for hundreds of clients where English was their second language and it has been the greatest honour of my life to give them a legal voice.”

Miss Glouftsis has been recognised on Australia Day this year for service to Australian rules football, particularly as an umpire. In fact, she’s been involved in Australian Football League since 2017, as well as an AFL Umpiring Growth and Development Coordinator – Schools and Female, since 2019.

“It’s exciting and very humbling… It’s been a pretty crazy journey and it started out because of my love for football and for umpiring,” Miss Glouftsis tells The Greek Herald about how she feels after being recognised.

“I’m very humbled to be in a position where I’m helping other younger girls see that if these things are possible then they probably think it’s possible as well.”

Mr Michael Panormitis Pakakis has been honoured for his significant service to STEM education in Victoria. Mr Pakakis is not only the founding Director of the Victorian Space Science Education Centre at Victoria’s Strathmore Secondary College since 2006, but he has also been Assistant Principal at the College since 2016.

“Books were what sparked my interest in science and when the Americans landed on the moon in July 20, 1969, I told my dad I wanted to do something related to science,” Mr Pakakis tells The Greek Herald about why he become involved in STEM education.

He adds that his life motto is one that NASA instills in all astronauts.

“Failure is not an option. Perseverance is the only option. I think this says it all,” he says.

Mrs Ismini (Pitsa) Parrett passed away on February 26, 2020, but the amazing woman was still recognised on Australia Day this year for her service to community health through exercise therapy and aquatic rehabilitation.

Mrs Parrett was heavily involved as an Instructor of Aquatic Rehabilitation, Aerobics, Aqua-Aerobics and Pilates at the Australian Institute of Sport from 1995 to 2007. She was also an Exercise Therapist and Fitness Instructor from 1969 to 2007.

With regards to community work, Mrs Parrett was a past member of the Calvary Hospital Auxiliary, as well as a course contributor at the University of the Third Age in Canberra.

“She was unbelievable, that woman. She loved Greeks and her Greek heritage and the Greek way of life,” Mr Colliss Parrett, Mrs Parrett’s husband, tells The Greek Herald.

“I don’t know who was behind it but she finally got the recognition she deserved. Nobody on this planet deserved what she got as much as her. Pitsa was incredible.”

Mrs Sotiria Liangis was honoured for her significant service to the community through philanthropic support initiatives. Mrs Liangis is a supporter of a range of charitable and not-for-profit organisations including: The National Portrait Gallery of Australia, The Canberra Hospital, The Starlight Foundation, Koomarri, St Nicholas Home for the Aged, St John the Baptist Church in Batemans Bay, and Canberra Centenary Hospital for Women, Youth and Children.

Mrs Liangis is also the Director, owner and property developer of Liangis Investments since 1967.

Awards and other recognition for Mrs Liangis include: She was awarded an Order of Australia Medal in 1996; Two National Portrait Gallery spaces were named the Liangis Theatre and the A & S Liangis Gallery in her honour in 2008; she was awarded the Centenary Medal in 2001; and she was also named Telstra ACT Business Woman of the Year in 1995.

Mr John Varnavides joined the Western Australia Volunteer Fire and Rescue Service (VFRS) at the Pemberton Volunteer Fire Brigade in 1971. Since that time, he has attended over 900 incidents including bushfires, dangerous structure fires, storms and road crash rescues. He has held most of the leadership positions within the Brigade and is one of the longest serving operational firefighters in the region.

In addition to frontline volunteering duties, he has mentored and trained volunteers. Whilst attending and actively participating in all training sessions, he has promoted fitness and discipline among volunteers, as well as the enhancement of firefighting skills through training and competitions. He is consistently called upon to assist with training, station inspections, and a myriad of other tasks. He is best known as the Brigade’s Apparatus Officer, a role he held for more than 15 years.

His passion for improving Brigade services and facilities has, over the years, resulted in the establishment of the new brigade building, along with securing equipment, and subsequent extensions and interior renovations. The vastly improved facility is a testament to his commitment to the Brigade, and to the local community.

He is a dedicated volunteer firefighter who displays a high degree of personal drive and adaptability. He develops strong working relationships with community members, volunteers and across all levels of management.

Mr Varnavides has provided distinguished service to the Western Australian Volunteer Fire and Rescue Service, and to the Pemberton and wider community, throughout his 50 year volunteer career.